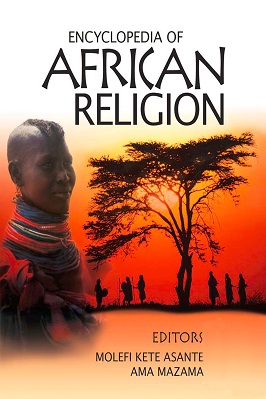 The Encyclopedia of African Religion is the first comprehensive work to assemble ideas, concepts, discourses, and extensive essays on African religion.

Over the years, there have been numerous encyclopedias on religion from other parts of the world, but African religion has often been relegated to “primitive religions,” “African mythologies,” or “tribal religions” sections of such works on religion. It is as if African religion is an afterthought in the eyes of the authors and editors of such volumes.

Of course, these designations are clearly based on outmoded and problematic Western notions of Africa, and we have created this encyclopedia as a monument to the memory of those Africans who left us enough information from which to rediscover for the world the original beauty and majesty of African culture. There were two objectives in advancing this work to the public.

First, we wanted to provide the primary material necessary for further research, analysis, and exposition of the concrete beliefs of African people. Second, we sought to elevate the discourse around African religion, suggesting by the presentation of nearly 500 entries that there was still much we did not know about African culture.

There are still those whose knowledge of Africa is grounded in the perceptions and attitudes of missionaries, merchants, and marines who have occupied the continent through foreign religions, trade, or guns.

The enormity of African contribution to ideas of religion, spirituality, and ethics has gone unappreciated by religious scholars, although at the beginning of human history, Africa makes its case for the origin of religion in an official, formal manner.

It is our hope that the reflection on African religion occasioned by these entries will enhance our understanding of the African world and provide a new adventure for comparative studies. Unquestionably, a work as innovative and comprehensive as this encyclopedia makes its mark in the area of intellectual inquiry by staking out new areas of knowledge.

It provides the reader with new metaphors, tropes, figures of speech, modes of reasoning, etymologies, analogies, and cosmogonies to satiate the intellect. Only in such an encyclopedia as this can one truly grasp the enormity of Africa’s contribution to religious ideas.

Given that we viewed African religion as one religion and the African continent as a whole, we were inclined to introduce classical African religious ideas, from the beginning of Kemet to the arrival of Christianity and later Islam in Africa, as significant forerunners of much of continental African thought.

The same appeal to ethics, based on righteous character; the same search for eternal life, found in living a life where good outweighs evil; and the same openness to ancestral spirits, kas, as remaining among the community of the living, creates an appreciation of the recurring cycle of humanity.

Correspondences of language and concept as with Amen, Amani, and Imani, which are transgenerational and transcontinental, remain vibrant parts of the African legacy of religion. When the Akan use the words Kwame, Asare, and Nkwa, they recall the more ancient Amen, Ausar, and Ankh.

Several books, starting with the older works of Eva Meyerowitz, have examined these correspondences.

Of course, in more recent times, Afrocentric authors such as Mubabinge Bilolo, Chinweizu Chinweizu, and Theophile Obenga have identified other correspondences in the religious and philosophical traditions of Africa.

Because of this reality, much of African religious thought has been distorted and confused as authors have tried to force newly discovered or uncovered or different concepts into old and familiar classes.

Therefore, as editors, we have avoided ironclad classificatory schemes and sought entries that revealed as closely as possible the actualities of African societies. What we wanted the entries to reveal was the thinking of African people about religion from the earliest of times.

The 20th-Century Rediscovery of African Religion

The extraordinary attention and widespread interest aroused by the publication of John Mbiti’s African Religions and Philosophy thrust African religion into the modern discourse about ways that humans have experienced the sacred.

Subsequent African authors such as Bolaji Idowu, Kofi Opoku Asare, Emeka Nwadiora, Ifa Karade, Wande Abimbola, and Laurent Magesa engaged the discussion on African religion with the idea of expanding and clarifying much of what was written by Mbiti in the 1960s and 1970s.

Of course, in most cases, these writers were, like Mbiti, Christians or newly reconverted Africans who were attempting to explain African religion in the context of Christian theology. Mbiti, for example, had been an ordained Anglican priest who was eventually elevated to canon in 2005.

Born in Kenya, Mbiti studied in Uganda and the United States before finally completing his doctorate at Cambridge. During his career, he taught religion in Africa and Europe and was the director of the World Council of Churches Ecumenical Institute.

Although it was his intention to challenge Western assumptions that African religion was demonic and anti-Christian, Mbiti’s work, written from a Christian perspective, had the impact of catering to Western ideas about Africa.

As a parish minister in Burgdorf, Switzerland, Mbiti continued to advance the idea that Christianity was more significant than African religion and never returned to the religion of his ancestors.

Although this is not meant as a condemnation, it is nonetheless an awareness of the complexity and contradictions of Mbiti’s approach to traditional African religion.

Mbiti’s African Religions and Philosophy remain a classic text in the historical sense, but it further complicates the discourse on African religion by insisting on a plurality of religions in Africa.

A number of writers have contested this reading of African culture, claiming that the unity of African religion is uncontested by philosophy, practice, and ritual. Actually, Mbiti’s original title to his book, African Religions, and Philosophy, suggests his own ambivalence about the nature of this unity. “African religions” in his title is problematic, but “African philosophy” is not.

One is an insistence on plurality, and the other is a statement of unity. In the Encyclopedia of African Religion, we have taken as a starting point the unity of African religion, although we are quite aware of the diversity of expressions of that religion, much like one would see in Christianity, Judaism, Buddhism, Islam, or other human religions.

African religion dramatizes its unity in the universal appeal to the spirits that animate all of nature. Humans, stones, trees, animals, lakes, rivers, and mountains are conjoined in one grand movement toward the continuation of life.

However, the entries that are included in our Encyclopedia have convinced us that the ideas of reciprocity, circularity, and continuity of the human community are essential elements in the discourse on African religion.

At the core of this continuity is the belief that ancestors remain active in the community of the living. Almost all other actions on Earth are dependent on the eternal community that encompasses the unborn, the living, and the deceased. The Encyclopedia of African Religion articulates a philosophical approach to this topic that situates African transcendent expressions in a unitary sense.

Fractured by numerous cultural and spiritual intrusions, African religion has withstood the worst of human brutality and cruelty against other humans with solemn resilience. There are some beliefs and aspects of life and knowledge that are consistent across the continent. For example, human beings originated on

TRANCE AND MODERNITY IN THE SOUTHERN CARIBBEAN pdf