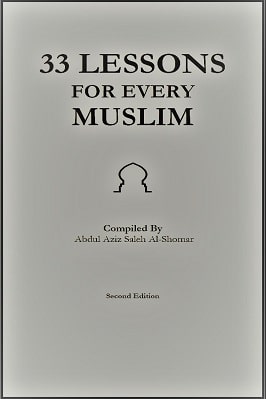 33 LESSONS FOR EVERY MUSLIM

33 LESSONS FOR EVERY MUSLIM

The author Says: I had the opportunity to read the book titled “The Most Important Lessons For Every Muslim” written by Sheikh Abdulaziz Bin Baz (May Allah have mercy on him), which I think, is a highly beneficial book to all Muslims. It gives basic requirements for the foundation of their Aqeedah (creed) and ‘Ibadah (worship).

It struck me that this small but informative book would be of immense benefit for non-Arabic speaking Muslims, spread all over the world, if translated into another foreign language.

While translating this book, it dawned on me that the Sheikh has written this book, primarily for Arab speaking Muslims and thus has written most of the information very briefly.

But this may not be sufficient for non-Arab Muslims, whose knowledge of Islam is mixed with their local cultures and practices, resulting in deviations from pure Islamic monotheism.

It is a known fact that huge numbers of new Muslims are attracted to Islam from different countries and different cultures.

It is important that knowledge of Islam should be provided to them with great care and there should be no confusion in the basic religious knowledge imparted to them.

Otherwise, we will be responsible for all the deviations which might crop up among these generations of new Muslims.

Hence, I added new information to the original text, giving a detailed description of some subjects.

I also added a few sections, such as transliteration of some small chapters from the Quran, to help the new Muslims recite during the prayers and encourage them to start their prayers from day one of their reverting to Islam.

I added a few chapters to this book when I saw some Muslims misleading other innocent ones in the area of Iman and Ibadah, and instead leading them towards Shirk (Polytheism) and finally to Kufr (Disbelief).

These innocent Muslims indulge in Shirk not only by being unaware of it, but all the time assuming that they are doing a valid duty in Islam.

This sad situation has to be corrected by every Muslim, by eliminating the remnants of unIslamic Jahiliya (Ignorance) practices, which are still clinging to the practices of Muslims.

I started with the intention of translation but completed my work as a compilation. I have to acknowledge the services provided by brothers Magdi Al-Radi, Jassim Kitchilan, Ibrahim Kunna Abdulqadir Abdulkhaliq, Waleed Timbang and specially my brother Soliman Albuthi for their invaluable editing, suggestions and proofreading of the text.

We will be greatly honored, if this humble effort of all of us could be of some benefit to the Muslims to improve their knowledge in Islam, and may Allah accept this service from His humble servants.

Hence, I added new information to the original text, giving a detailed description of some subjects. I also added a few sections, such as transliteration of some small chapters from the Quran, to help the new Muslims recite during the prayers and

THE WAY TO SALVATION IN THE LIGHT OF SURAH AL-ASR