A COMPREHENSIVE COMMENTARY ON THE QURAN pdf 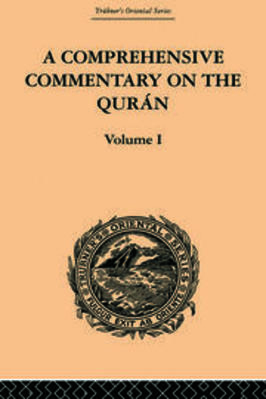 A COMPREHENSIVE COMMENTARY ON THE QURAN

The Quran is divided into 114 larger portions of Very Divisions of unequal length, which we call chapters, but the Arabians Suvar, in the singular Sura,

a word rarely used on any other occasion, and properly signifying a row, order, or regular series, as a course of bricks in building or a rank of soldiers in an army; and is the same in use and import with the Sura or Tora of the Jews, who also call the fifty-three sections of the Pentateuch Seddrim, a word of the same signification.

These chapters are not in the manuscript copies distinguished by their numerical order, though for the reader’s chapters- ease they are numbered in this edition, but by particular titles, which (except that of the first, which is the initial chapter,

or introduction to the rest, and by the old Latin translator not numbered among the chapters) are taken sometimes from a particular matter treated of or person mentioned therein, but usually from the first word of note, exactly in the same manner as the Jews have named their Sedarim; though the words from which some chapters are denominated be very far distant, towards the middle, or perhaps the end of the chapter, which seems

👉 Click to load all books of Other Quran studies and Orientalism