Home » A Journey through the Islamic faith pdf download 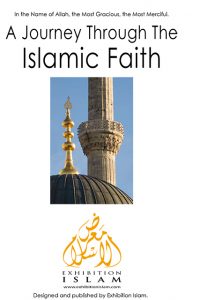 Contents  from A JOURNEY THROUGH THE ISLAMIC FAITH

A JOURNEY THROUGH THE ISLAMIC FAITH

A JOURNEY THROUGH THE ISLAMIC FAITH book sample

The Islamic world has had a considerable influence on the development of Western civilisation and contributed immensely to the achievements of the Renaissance.

Moreover, Muslim interaction with Europe, as well as the historical successes by Islamic scientists and scholars have made a positive and longlasting impact on the current era of science and technology.

As Islam instructs man to use his powers of intelligence and observation, these contributions helped to bring Medieval Europe out of centuries of intolerance and scientific neglect during the Dark Ages.

Within a short space of time since the birth of Islam in the 7th century, great cities and centres of learning were flourishing across the Muslim world.

From the 11th century onwards Europe began to absorb much of this knowledge from the Islamic civilisation.

The fusion of Eastern and Western ideas, and of new thought with old, brought about great advances in medicine, mathematics, physics, astronomy, geography, architecture, art, literature and much more.

Many crucial systems, such as algebra, the Arabic numerals and the concept of the number zero were transmitted to Europe from the Muslim world.

Sophisticated instruments developed by Muslims – A JOURNEY THROUGH THE ISLAMIC FAITH

Sophisticated instruments which were to make possible the European voyages of discovery, such as the astrolabe, the quadrant, and accurate navigational maps, were also developed by Muslims.

It is useful to mention the statements of various historical figures

regarding the tolerance in the Islamic world at the time.

For example, Patriarch Theodosius of Jerusalem, expressed in a letter written to the Patriarch of Constantinople in 869 CE, ‘The Saracens [i.e. The Muslims] showus great goodwill.

They allow us to build our churches and to observe our own customs without hindrance.’ (C. J. Walker, Islam and the West, Sutton Publishing, 2005, p. 17).

Theodosius was certainly the equivalent of the Archbishop of Canterbury in Jerusalem at the time. What he stated has also

been corroborated by other Christian figures such as Bernard the Wise (a French pilgrim who visited Jerusalem during the reign of Caliph al-Mu’tazz [866-9 CE]), who stated that if any property was left unattended for some time, it would be found unmolested upon return, ‘such is the peace there’ (C. J. Walker, p. 17).