Home » A Paper on Hadiths of Month of Muharram pdf

A Paper on Hadiths of Month of Muharram pdf 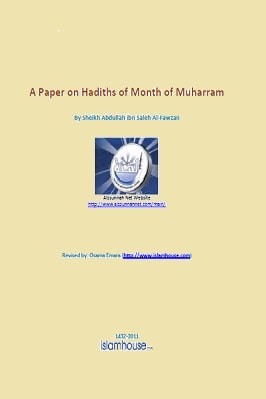 A Paper on Hadiths of Month of Muharram

A Paper on Hadiths of Month of Muharram

The Virtue of Month of Muharram

From the Book-: On the authority of Abu Hurairah, may Allah be satisfied with him, he said, “The Prophet, may the blessings and peace of Allah, once said,

‘Second to Ramadan, the best time for fasting is the divine month of Muharram, and second to the prescribed prayers is the night prayer,’” while another narration reads, “Prayer in the middle of the night.” (Reported by Muslim) (4)

The Hadith is a proof to the virtue inherent in fasting the divine month of Muharram, being next in virtue to Ramadan.

The virtue of fasting therein is derived from the virtue of its time and maximized fasting reward thereat for fasting is one of the best rewarded deeds by Allah.

Muharram is the starting month of Hijri years. It is a tradition first developed in the era of the orthodox caliph Omar Ibn Al-Khattab, may Allah be satisfied with him. It is also one of the Inviolable Months named by Allah in the Ever-Glorious Qur’an for Allah Almighty says,

“Surely, the (right) number of the mother in the Providence of Allah is twelve months (ordained) in the Book of Allah the day that He created the heavens and the earth. Four of them are prohibiting. That is the most upright religion. So don not do (any) injustice to yourselves during them.” [9 / 36]

On the authority of Abu Bakr, may Allah be satisfied with him, he reported the Prophet (PBUH) as saying, “A year consists of twelve months four of which are inviolable: three are consecutive;

Thul-Qe’dah, Thul-Hijjah and Al-Muharram, and (the fourth is) Rajab of the tribe of Mudar which lies between the months of Jumadah and Sha’ban,” a Hadith agreed upon (5).

For glorification and honoring, this very month has been added by Allah to Himself for Allah would not bestow divine nature on anything unless of utmost importance and uniqueness.

Take, for example, the House of Allah, the Messenger of Allah, etc. It is called Muharram (inviolable) to confirm its inviolability since Arabs used to be moody about it, i.e. to prohibit fight therein for a year but allow in the next.

Allah Almighty says, “So do not do (any) injustice to yourselves during them,” which means do not do so in such inviolable months since injustice therein are more vicious than anytime else. Qatadah said,

“Injustice in the Inviolable Months is more vicious and far sinful than any other time. Though injustice is intolerable at all times, Allah bestows importance on whatever He likes.” (6)

Allah made timings of these lunar months for people since they are physical phenomena the beginnings and ends of which are known to all.

It is regrettable that many Muslims have lost the Hijri Calendar to the Gregorian calendar which is based on illusionary months unsupported by any comprehensible, reasonable and / or physical features!

This attitude is but an indication for weakness, defeatism and yielding to non-Muslims. Consequences of the same include linking Muslims and their children to the Christians, while taking them away from their Hijri Calendar which is associated with their Prophet (PBUH), rites and worships (7). We seek Allah’s help on this!

Yet, voluntary fasting of some days of Muharram may not be superior to other days such as the Day of Arafah, and the Six Days of Shawwal.

In other words, the Hadith ostensibly advises for fasting the full month of Muharram. Some scholars, however, interpret it as a means of encouragement to fast as much days of Muharram as possible, but not the whole month as ‘A’eshah, may Allah be satisfied with her, once said,

“I have never seen the Prophet, may the blessings and peace of Allah be upon him, fasting a full month but Ramadan, but never seen him fasting as much days of another month as possible but Sha’ban,” reported by Muslim (8).

Oh Allah, wake us from inattentiveness, help us prepare before death, inspire use to use our times well, guide us to good deeds, and help us relinquish bad deeds.

May the blessings and peace of Allah be upon Mohammed, our Prophet!

‘A’eshah, may Allah be satisfied with her, said, “The day of Ashuraa’ used to be fasted in the pre-Islamic era, the Prophet, may the blessings and peace of Allah be upon him, himself used to fast it at that time. After immigration to Medinah, the Prophet fasted it and commanded Muslims to follow suit. But once the fasting of Ramadan turned obligatory, Ashuraa’ was no longer fasted. Rather, it has become a matter of choice.” reported by Al Bukhari and Muslim (9).