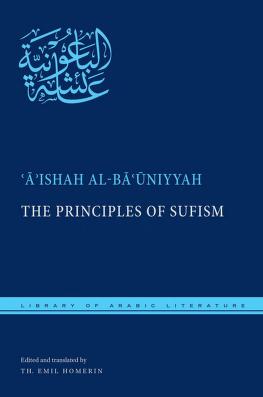 A’ishah al-Ba‘uniyyah (d. 923/1517) was an exceptional Muslim scholar. She was a mystic, and a prolific poet and writer, composing more works in Arabic than any other woman prior to the twentieth century. In her writings, A’ishah often

speaks other abiding love for God and His prophet Muhammad, and her quest for mystical union. These concerns are central to The Principles of Sufism, a mystical guide book that A’ishah compiled to help others on this spiritual path.

Drawing lessons and readings from a centuries-old Sufi tradition, A’ishah advises the seeker to repent of selfishness and turn to a sincere life of love. Fundamental to this transformation is the recollection of both human limitations and God’s

limitless love. In The Principles of Sufism, A’ishah recounts important stages and states on the path toward mystical union, as she urges her readers to surrender themselves to God and willingly accept His loving grace.