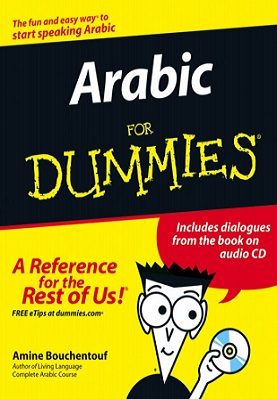 Contents at a Glance – ARABIC FOR DUMMIES

Part I: Getting Started ….7

Chapter 4: Getting to Know You: Making Small Talk ….61

Chapter 5: This Is Delicious! Eating In and Dining Out ….81

Chapter 14: Getting from Here to There: Transportation ….239

Chapter 18: Ten Things You Should Never Do in an Arab Country …299

Arabic, the official language of over 20 countries, is the mother tongue of over 300 million people. It’s spoken throughout the Middle East, from

Morocco to Iraq. Additionally, because Arabic is the language of the Koran and Islam, it’s understood by more than 1.2 billion people across the world.

Due to recent geopolitical events, Arabic has catapulted to the top of the list of important world languages. Even in countries where Arabic isn’t the official language, people are scrambling to master this important and vital global language.

For people in North America and Europe, at first glance Arabic seems like a difficult language to master; after all, it isn’t a Romance language and doesn’t use the Latin alphabet. However, like any other language, Arabic is governed by a set of rules, and when you master these rules, you’re able to speak Arabic like a native speaker!

Arabic For Dummies is designed to identify and explain the rules that govern the Arabic language in the easiest and most interactive way possible. I orga- nize each chapter in a straightforward and coherent manner and present the material in an interactive and engaging way.

Unlike most books on the Arabic language, Arabic For Dummies is designed in a way that gives you the most accurate and in-depth information available on the composition of the language. The book is modular in nature; every chapter is organized in such a way that you don’t have to read the whole book in order to understand the topic that’s discussed. Feel free to jump through chapters and sections to suit your specific needs. Also, every grammatical and linguistic point is explained in plain English so that you can incorporate the concept immediately. I took great care to explain every concept clearly and succinctly.

To provide the best foundation and the widest usage for students of Arabic, Arabic For Dummies focuses on Modern Standard Arabic (MSA), which is the most widely used form of Arabic in the world. There are basically three different types of Arabic: Koranic Arabic, local dialects, and MSA.

v Koranic Arabic is the Arabic used to write the Koran, the holy book for Muslims. This form of Arabic is very rigid and hasn’t changed much since the Koran was written approximately 1,500 years ago. Koranic Arabic is widely used in religious circles for prayer, discussions of Islamic issues, and serious deliberations. Its usage is limited primarily within a strict religious context. It’s the equivalent of Biblical English.

v The regional dialects are the most informal type of Arabic. They tend to fall into three geographical categories: the North African dialect (Morocco, Algeria, Tunisia, and Libya); the Egyptian dialect (Egypt, parts of Syria, Palestine, and Jordan); and Gulf Arabic (Saudi Arabia, Kuwait, Iraq, Qatar, and the United Arab Emirates). Even though the words are pronounced differently and some of the everyday expressions differ dramatically from region to region, speakers from different regions can understand each other. The common denominator for the regional dialects is that they’re all based on MSA.

v Modern Standard Arabic (MSA) is the most widely used and under- stood form of Arabic in the world. It’s less rigid than Koranic Arabic but a bit more formal than the local dialects. MSA is the language that Arabic anchors use to present the news, professionals use to discuss business and technical issues, and friends and families use to socialize with one another.

THE TEACHING AND LEARNING OF ARABIC IN EARLY MODERN EUROPE pdf