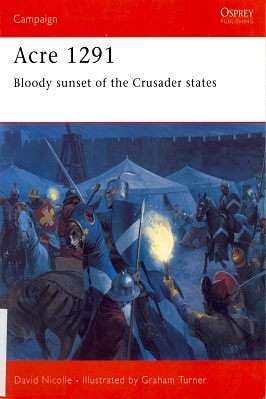 Bloody sunset of the Crusader states – Acre 1291 by Niccole David

BLOODY SUNSET OF THE CRUSADER STATES

The origins of the campaign

The fall of Acre in 1291 is seen by most western historians as a very significant event and as the final chapter of the Crusading epic. It clearly had a huge psychological impact, but when compared to contemporary events in the wider Islamic world and in Europe, its geopolitical importance was small.

Another problem’ as far as European historians have been concerned is that the victors were of slave origin, and westerners have traditionally found ‘rule by slaves’ deeply abhorrent.

Paradoxically, Middle Eastern scholars have been less concerned about this fact, recognizing that adult Mamluks were actually ‘freed men’ rather than slaves and that the nobility or otherwise of a medieval Islamic ruler reflected his actions and piety rather than his origins.

Until recently the aristocratically dominated societies of Europe also saw the rapid political changes which characterized the Mamluk Sultanate as evidence of a corrupt political system dominated by intrigue and assassination. In reality, the Mamluk Sultanate was highly competitive, with power and legitimacy as prizes to be won by the strongest or cleverest.

Another paradox can be seen in the unexpected attitude towards Islam of some Christian thinkers around the time of the fall of Acre. Such scholars and missionaries maintained that Muslim beliefs were so close to Christianity that conversion should be easy.

One such optimist was a Dominican friar, William of Tripoli, who lived in Acre and completed his book On the State of the Saracens in 1273.

The great Italian poet Dante grew up while Acre was still in Crusader’s hands. He placed Saladin and other good Saracens’ in Limbo in his Divine Comedy, not a place of torment but