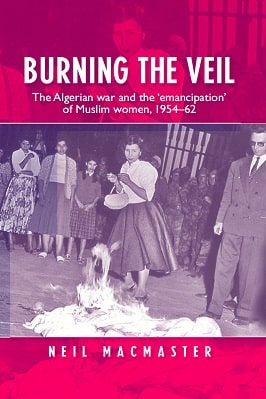 Burning the veil – The Algerian war and the ‘emancipation of Muslim women, 1954–62

BURNING THE VEIL – THE ALGERIAN WAR AND THE ‘EMANCIPATION’ OF MUSLIM WOMEN, 1954–62

From 1926 onwards, the date of the foundation of the Algerian pro-independence movement the Étoile Nord-Africaine (ENA), the forces of nationalism began to gain a mass popular base and to place enormous pressure for change on a colonial regime that was intent on preserving the social, political and economic domination of European settler society.

The tensions between the two communities reached a breaking point at the end of the Second World War.

The declaration of the Atlantic Charter (14 August 1941) in which Churchill and Roosevelt offered a vision of a post-war world in which all peoples would have the right to self-determination; the Anglo-American landings in North Africa in November 1942;

the fall of the Algerian pro-Pétainist regime; coupled with expectations that the massive involvement and sacriﬁce of Algerian soldiers in the European campaigns against fascism would receive political recompense, generated an intense expectation of change among the nationalists.

However, the right-wing settler political elites were determined to respond to this challenge not by carrying out long-overdue reform and by accepting Algerian equal rights, but rather by trying to reassert the pre-war status quo that was based on a system of military power, repressive laws, policing and state violence.

The tension finally came to a head-on VE day, 8 May 1945, when the nationalists participated in mass demonstrations to celebrate the defeat of the Nazi regime. At Sétif the Algerians paraded the illegal ﬂ ag of the independence movement, and this was met with police gunﬁ re that in turn triggered off a small-scale peasant revolt in which a hundred settlers were killed.