Context and Catholicity in the Science and Religion Debate pdf 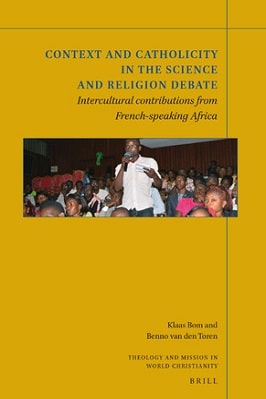 CONTEXT AND CATHOLICITY IN THE SCIENCE AND RELIGION DEBATE

‘The debate on science and religion’ and ‘French-speaking Africa’ make an un-usual combination of fields of study. For years the fact that this debate was not related to cultural diversity was considered only a minor issue. The majority of participants in these discussions were from the North Atlantic world.

Not even the effect of the cultural diversity within this North-Atlantic world was made explicit or studied. However, lately, and for several reasons, the ‘Western’ dominance in the debate, is considered to be too restricted, and there is concern that it does not allow for new understandings of what science and religion might mean.

This book testifies to the growing interest in the different cultural embeddings of science and religion and proposes a theoretical framework that makes an intercultural debate possible.

In our study, we focused on the discourses of Christian students and academics from three cities: Abidjan, Kinshasa, and Yaoundé. This implied a thorough study of what could be called ‘lived theology’ and therefore an interdisciplinary approach was necessary.

Although the Science and Religion interface requires some form of interdisciplinarity anyway, the current blossoming of interdisciplinary approaches in theology makes a proper theological perspective on the debate on Science and Religion even more necessary. Our aim is to relate the outcomes of the field research to a worldwide perspective of doing theology and to connect with a broader scope of scholarly discussions.

This study, therefore, makes a contribution to at least five areas of study. In the first place, it is a contribution to the study of world Christianity. This case study particularly presents a detailed analysis of how different cultural influences interact to form new cultural realities.

This study secondly contributes to the broader field of cultural studies that is interested in the shaping of multiple modernities. In the third place, this study contributes to historical and anthropological studies that relate the broader science and religion debate to particular cultural and social contexts in which the debate develops. Fourthly, this study is also intended as an intercultural contribution to the global science and religion debate.

And finally, this project intends to contribute to the development of the discipline of intercultural theology by exploring how local interactions of the Christian faith in complex cultural environments can contribute to a Christian theological conversation worldwide.

This monograph is the result of a close and creative collaboration between the two authors, with Benno van den Toren as project leader and Klaas Bom as co-leader and principal investigator. Benno wrote chapter 1 and the first part of chapter 2 and made a robust contribution to the section ‘Christianity in Africa’