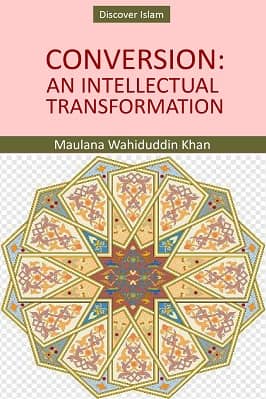 But this is a limited concept of conversion, which needs to be viewed in a more scientific light.

The religious view of conversion relates only to religious tradition. In this respect it is relatively limited in its spectrum.

The scientific outlook, on the contrary, is much broader in scope, being based on the eternal principles of nature itself.

Although it would be proper to say that, in the religious context conversion for human beings is a matter of choice, in the scientific sense, this is not so.

It is an eternal principle of life, in exactly the same way as the laws of nature have the status of being immutable.

Conversion in Islamic thought is not synonymous with proselytism in the formal sense. It is an event, which takes place in a person’s life as a result of intellectual revolution or spiritual transformation.

It is not simply leaving one religious tradition for another. The Islamic ideal of conversion is for the individual to discover the truth after an exhaustive search for it and then by his own choice, abandon one religion for another.

During his final phase in 6 A.H., Prophet Muhammad e sent letters to the neighbouring rulers of his time, by which they were directly invited to accept the message of Islam.

For instance, in his letter to the Byzantine Emperor Heraclius I, the Prophet wrote these words: “Accept Islam and you will be blessed with peace.”

Similarly at any gatherings which took place in Makkah, the Prophet would make a point of going to that place and address the assembled people thus: “O people, say there is no god but God and you will attain God’s grace.”

At first glance this was an invitation to people to change their religion. But the study of the Quran tells us that it was in actual fact an invitation to a transformation in thinking, and not a change of religion in the simple sense.

In the first phase of Islam, some Arab Bedouins had accepted Islam just by reciting the kalima, the creed of Islam, while they had not undergone any change in character at a deeper level. The Quran admonished them in strong terms:

The Arabs of the desert say ‘We believe.’ Say. “You have not believed yet; but rather say, ‘We have accepted Islam, for the true faith has not yet entered into your hearts.’”(49:14).

From this we learn that conversion according to Islam means a thorough transformation of the person and not just a change of religion in the everyday sense.

There is a formal method of religious conversion prevalent among the Jews and Christians known as baptism.

In this ritual ceremony, the convert is dipped in water. The hue of water considered a symbol of purity, and their priests believe that dipping someone in pure clean water purifies him, and he is thus converted to a new religion.

But pouring water outwardly does not purify a person, for the attainment of purity necessitates a transformation of the total human personality. The convert is suffused with the hue of God and he adopts God’s ways in thought, word and deed.

The Quran refuses to give its seal of approval to conversions, which are mere formalities. In ancient Madinah there was the case of about three hundred people having become Muslims by reciting the Islamic creed.

To all intents and purposes they even said their prayers, and fasted, but they did all this in a hypocritical manner, paying only lip service: their inner state did not correspond to their outward pronouncements.

They claimed allegiance to Islam by word of mouth but, as regards the state of their hearts, the Islamic spirit was lacking.