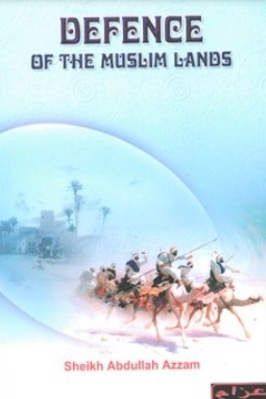 Defense of the Muslim Lands – The First Obligation After Iman By Dr. Abdullah Azzam (May Allah accept him as Shaheed) English translation work done by Brothers in Ribatt.

DEFENSE OF THE MUSLIM LANDS

Abdullah Yusuf Azzam was born in a village in the North of Palestine named Selat Al Harithia in Genine District in the year 1941.

His father’s name was Mustafa Azzam who died a year after his son was assassinated. His mother was Zakia Saleh who died one year before the Sheikh was killed.

She was buried in Pabi camp. The Azzam family is a well-known family, one of its members being Sheikh Abdullah Azzam, distinguished as child, who started making Da’wah at an early age.

He was already showing signs of excellence and was recognized by his teachers while he was in elementary school.

His peers knew him as a pious child. Since he was a small boy he was known for his determination

and serious dispositions. Before he had even come of age, he joined the Muslim Brotherhood.

Sheikh Abdullah Azzam received his early elementary and secondary school education in his village, and continued his education at the agricultural Khadorri College where he obtained a Diploma.

Although he was the youngest of his colleagues, he was the brightest and most astute.

After he graduated from Khodori College, he worked as a teacher in a village named Adder in the South of Jordan.

Later he joined Shariah College in Damascus University where he obtained a B.A. Degree in Shariah in 1966. After the Jews captured the West Bank in 1967,