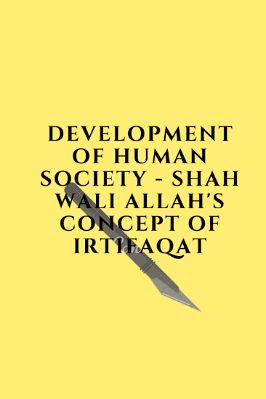 To him all development is based on natural law and consists of the traid of the human intellect.

Religion, according to Shah Wali Allah is the foundation stone of this development, and the basic or primary unit of historical significance.

He divides the development of human society into four periods of civilisation (Irtifdqat). first as Bctdavi .

(Nomad), second as Hazari (civilised town), third as Madani (City-State) and fourth as Khilafah (Universal state for the future), and three of ignorance (Jahiliyah) in between.

But they are neither separated nor in different with each other and are like a one whole.

That development has a universality of purpose and approach but there is diversity in methods,

Shah Wali Allah studies development under the caption of “IrtafaqaC which also points out the nature of development, nomad, village, city sate and government and universal state and nation, in the society.

He points out the institutions coming into existence during the course of historical development and a universal state for future urges and development of humanity which would provide man with the opportunities for a powerful and devoted spiritual life, linked with the nature of ‘Alam-i-Mithal and Mala-i-A‘la.

According to Shah Wali Allah everything in the universe is undergoing a constant process of evolution, continuity and change.

The idea of evolution is a sort of emanation (Tadalli). and the Shah has discussed the idea in his books Budur-al-Bazighah , Sata’t and Hujjat.

In evolution the will of God firstly appeared in the form of minerals, then as plants and in the third phase animal beings came into existence and became the centre of the universe and the divine will.

Shah Wali Allah believers that as a fourth step of the universal plan of social evolution. Man came into existence from the animal being ; 1 according to the system of God’s attribute of planning ( Tadbir ) and the seal of the system i.e. mercy (Rahmat )