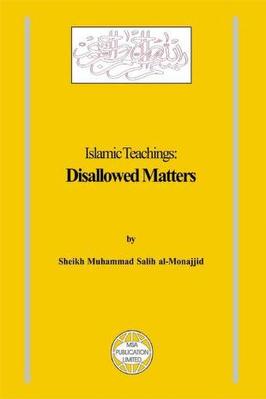 There are many things that have been prohibited in the Qurâaan and Sunnah, and it is very important for the Muslim to know about them so that he can keep away from them and thus avoid earning the wrath and anger of Allaah or bringing about his own doom in this world and the next.

So I thought of compiling this list of prohibited things, in accordance with the hadeeth of the Prophet (peace and blessings of Allaah be upon him):

Religion is sincere advice (al-deen al-naseehah),â and in the hope that it will be of benefit both to myself and to my Muslim brothers.

Topics are grouped according to the classifications used in fiqh (Islamic jurisprudence).

I have not quoted every hadeeth in full, only the relevant parts. In most cases the reports include words which clearly indicate prohibition (such as âDo not.â), and I have explained the reason for the prohibition in some cases.

I ask Allaah to help us to avoid sin and wrongdoing wherever it exists, visible or hidden, and to accept our repentance. Praise be to Allaah, Lord of the Worlds