Documents and the History of the Early Islamic World pdf 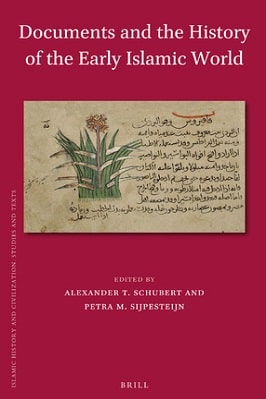 Documents and the History of the Early Islamic World

DOCUMENTS AND THE HISTORY OF THE EARLY ISLAMIC WORLD

The generally held and often-repeated generalisation that there are no documentary sources for the history of the first four centuries of Islamic history is slowly being undermined as new discoveries are made and old texts revisited.

It is interesting to reflect that a decade ago no one had any knowledge of the existence or possible existence of the Arabic documents from Tukharis-tan recently published by Geoffrey Khan.1

From Iran itself, we have the Pahlavi economic documents from the late seventh and early eighth centuries, now in the Bancroft Library at Berkeley, whose publication is just beginning.2

Greek papyri from Petra in Jordan, containing Arab names and Arabic phrases, are also in the process of being published.3 But despite this, it is Egypt that provides by far the most important body of documentary evidence,4 and this volume are essentially concerned with material from Egypt and southern Palestine.

The database of Coptic documents from the late antique and early Islamic periods suggests that there are over 7,000 preserved items, while the Arabic papyri are at least as numerous if not more so.

The number of Greek documents from the Islamic period continues to increase with the redating of material and a steady broadening of focus among Greek papyrologists to include the Islamic period.5 This is a vast amount of material for any early medieval society, even if the fact that they are not sorted or archived makes them difficult, and in some cases frustrating, to use.

It would be easy to imagine that the papyrus record is essentially concerned with administrative records, demands and receipts for tax payments, leases on properties, etc., and to be sure all these things can be found in this collection.

But the volume also demonstrates the contribution that documentary evidence can make to wider social history, to intellectual history and to our understanding of political events, where the documents can fill in gaps left by the well-known narrative sources.

Many documents show the early Islamic administration of Egypt as ruthlessly efficient and oppressive, but Mostafa El-Abbadi’s paper reveals a rather different side.

On the one hand, the administration is shown to maintain strict control over freedom of movement. The Arab administration brought in new restrictions: no one could go anywhere without the vital sigillion (Arabic sijill) and perhaps the passport is one of the Islamic world’s gifts (if that is the right word) to humanity.

This system is already well known but here we learn how meticulous this could be, with the example of a permit granted to a man to move to another village for work which was only allowed because it would enable him to pay his taxes.

Anna Selander in her paper, looking at the short texts requesting safe-conducts for travellers through particular roadblocks or checkpoints in the Theban region and later reused by the monk France for his bookbindings, shows how far down the administrative line this supervision of movement went. Selander also discusses the effects of the system of passports required of the subject population for their travelling compared to the pre-Islamic period.

The Arab administration is, on the other hand, shown to be anxious about discontent among the tax-payers and a desire to be fair and just, if only to avoid violent protests. El-Abbadi also shows how groups of Christian tax-payers could nevertheless coordinate their opposition.

Rather than a top-down managerial state in which the subjects can only accept their lot and pay up, we see an administrative environment in which there was considerable room for negotiation and in which the state and its employees had to take notice if they were going to achieve anything at all.

If taxes were inevitable so too was the other of Benjamin Franklin’s famous dyad of inevitable discomforts, death. In this volume, the material dealing with death is not on papyrus but on paper. It dates from the early thirteenth century and comes from the Red Sea port of Quṣayr, already well known for

👉 Click to load all books of History  Oriental Studies