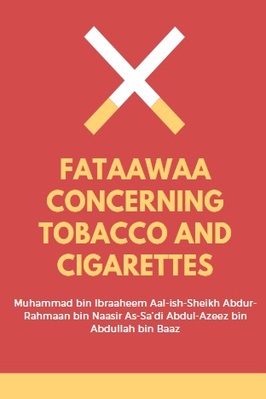 If we were to accord to this reasoning, one would find that we would not then be able to give judgment in many other matters in the religion,

for Allah, out of His infinite Wisdom, has given general rulings which allow us to judge specific matters, thus making His religion the ultimate source of legislation for all matters, in this world and the next, until the end of time.

Anyone who has the slightest understanding of Islam and its sources has no doubt concerning its permissibility, but others’ reasoning has been corrupted because of adhering to false notions, like blind following,

so much that their intellect ceases to function, not being able to perceive anything other than the opinion of the one they follow.

So it is upon those whom Allah has given the Tawfeeq 2 to under¬ stand the religion to break the shackles of ignorance and blind following, and to clarify to people the reality of tobacco which is so lightly taken by many today.

For this reason, we felt it necessary that the fataawaa 3 of schol¬ ars whom Allah has chosen not to be victims of this ignorance be known, to clarify to all the prohibition of this evil and repulsive habit, and to be from amongst those who