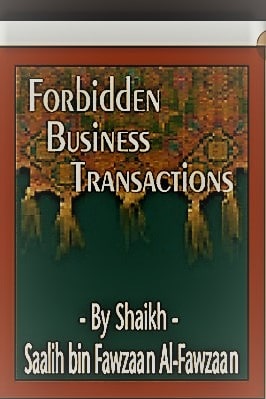 Buying and Selling, in itself, are both praiseworthy and necessary, so long as they do not cause harm to one’s worship or cause him to delay performing the prayer in congregation in the masaajid.

The Prophet (sallAllaahu ‘alayhi wa sallam) said: “The honest and trustworthy businessman will be with the prophets, martyrs and righteous people.”

This means: The businessman who buys and sells while being honest will be with these groups of people on the Day of Judgement. This is a great position, which indicates the nobility of holding such an occupation.

And the Prophet (sallAllaahu ‘alayhi wa sallam) was once asked as to which kind of earning was the most pure? So he responded: “A blessed trading (accepted by Allaah) and the labor a man does with his hand.” [Reported by At-Tabaraanee]

The Prophet (sallAllaahu ‘alayhi wa sallam) also said: “The two persons conducting a business are in a state of goodness so long as they do not separate from one another.

And he said: “Indeed the traders will be resurrected as sinful evil-doers (fujaar) except for those who fear (are dutiful to) Allaah, are righteous and honest.” [Reported by At-Tirmidhee who said it was hasan saheeh]

The Prophet himself (sallAllaahu ‘alayhi wa sallam) engaged in business transactions during the first part of his life, when he used to manage the money of Khadeejah.

This was before the advent of his prophethood. And he would buy and sell and gain profit.

This was the same for the Companions of Allaah’s Messenger – they would buy and sell and trade.

And there were found wealthy people amongst them who used their wealth to support the Jihaad in Allaah’s Cause, such as ‘Uthmaan bin ‘Affaan (rady Allaahu ‘anhu) who supplied the poor in the army with equipment.

And such was the case with ‘Abdur-Rahmaan bin ‘Awf (rady Allaahu ‘anhu) who would donate money to the Muslims at the time of need and at the time of Jihaad.

And such was the case with Abu Bakr as-Sideeq (rady Allaahu ‘anhu), for he would buy and sell and sacrifice his wealth to support Islaam and the Muslims, from the time he was in Makkah before migrating, as well as after migrating. He would give away much and much of his wealth for the Cause of Allaah.

Therefore, seeking the means of sustenance according to the permissible channels – the greatest of which are buying and selling – has much good in it.

However, this buying and selling must be set with religious guidelines, so that the Muslim can avoid falling into forbidden transactions and unlawful forms of earning.

The Prophet (sallAllaahu ‘alayhi wa sallam) has forbidden us from certain types of business transactions due to what they contain from sinful means of earning and what is found in them from dangers to mankind and the taking of wealth unjustly.

From these types of prohibited transactions are:

they take away from the time of the worship, such as when a person is busy buying and selling and holds back from praying in congregation in the masjid, to the point that he misses it or misses part of it. This is forbidden. Allaah says:

“O you who believe, when the prayer is called for on the Day of Jumu’ah, then rush to the Remembrance of Allaah and leave off the trading (commerce).

That is better for you if you did but know. So when the prayer is finished then spread throughout the land and seek from Allaah’s Bounty and remember Allaah much in order that you may be successful.” [Surah Al-Jumu’ah: 9-10]

And Allaah says in another ayah:

“O you who believe! Do not let you wealth or your children divert you from the Remembrance of Allaah. And whoever does that, then such are the losers.” Surah Al-Munaafiqoon: 9]

Take note of Allaah’s saying: “…then such are the losers.” He rules upon them that they are losers even though they may be wealthy, having amassed hoards of money, and even if they may have many children.

This is because their wealth and their children cannot replace what they missed out on from the Remembrance of Allaah.

So even if they gain a profit or earn income in this world, they will still be losers in every sense of the word.

And they would have acted on Allaah’s saying:

“So seek your provision from Allaah and worship Him (alone)” and His saying:

“So when the prayer is finished then spread throughout the land and seek from Allaah’s Bounty.”

“O you who believe, shall I not direct you to a trade (i.e. commerce) that will save you from a painful punishment? Believe in Allaah and His Messenger and strive hard and fight in the Cause of Allaah with your wealth and your lives.

That will be better for you, if you but knew! (If you do so), He will forgive you your sins and admit you into Gardens under which rivers flow and pleasant dwellings in the gardens of ‘Adan (i.e. Paradise). That is indeed the great success. And

e you another (blessing), which you will love – help from Allaah and a near victory. So give glad tidings to the believers.” [Surah As-Saff: 10-131

This is the immense commerce, which is profitable. So if the permissible commerce of this worldly life is attached to it, it becomes good upon good.

But if a person limits his commerce to solely that of this worldly life while abandoning the commerce of the Hereafter, he becomes a loser, as Allaah says: “…then such are the losers.” [Surah

Therefore, if a person were to turn his attention to performing worship and establishing the prayer, and if were to remember Allaah much, by doing what Allaah commanded him to do, Allaah would surely open the doors of sustenance for him. As a matter of fact, the prayer is a means for attaining sustenance (rizq), as Allaah says:

“And command your family with prayer and be patient in offering them. We are not asking you to provide Us with sustenance (rizq). (Rather), We will provide for you and the good end is for those who have Taqwaa.” [Surah Taha: 132]

So the prayer, which some people claim takes time away from them seeking after the rizq (sustenance) and from buying and selling, is in fact the opposite of what they claim.

It opens for them the door of provision, comfort and blessing. This is because the sustenance (rizq) is in the Hand of Allaah.

So if you were to turn your attention towards remembering Him and worshipping Him, He would facilitate and open the door of sustenance for you. “And Allaah is the best of Providers.” [Surah Al Jumu’ah: 11]

Allaah says, describing the worship of the believers:

“In houses (masaajid), which Allaah has ordered to be raised, and in which His name is mentioned.

He is glorified therein during the mornings and the evenings. (They are) Men whom neither business nor commerce diverts them away from the Remembrance of Allaah, nor from performing the Prayer or giving the Zakaat.

They fear a day when the hearts and the eyes will be overturned out of fear (of the horrors of the Day of Judgement).” [Surah An-Noor: 36-37]

In explanation of this ayah, some of the Salaf said: “They (the Sahaabah) would buy and sell, but when one of them heard the mua’dhin calling to prayer, and the scale was still in his hand, he would drop the scale and head out for the prayer.”

So as stated before, the point is that if the buying and selling preoccupies you from performing your prayer, then this commerce is forbidden and futile. And the money earned from it is Haraam (unlawful) and filthy.

2. And from the forbidden types of business is: Selling a forbidden commodity. This is because when Allaah makes something forbidden, He also makes taking money for