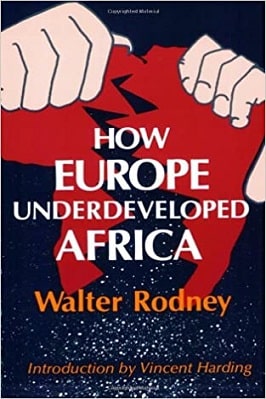 This book derives from a concern with the contemporary African situation. It delves into the past only because otherwise it would be impossible to understand how the present came into being and what the trends are for the near future.

In the search for an understanding of what is now called “underdevelopment” in Africa, the limits of enquiry have had to be fixed as far apart as the fifteenth century, on the one hand and the end of the colonial period, on the other hand.

Ideally. an analysis of underdevelopment should come even closer to the present than the end of the colonial period in the 1960s. The phenomenon of neo-colonialism cries out for extensive investigation in order to formulate the strategy and tactics of African emancipation and development.

This study does not go that far, but at least certain solutions are implicit in a correct historical evaluation, just as given medical remedies are indicated or contra-indicated by a correct diagnosis of a patient’s condition and an accurate case-history.

Hopefully, the facts and interpretation that follow will make a small contribution towards reinforcing the conclusion that African development is possible only on the basis of a radical break with the international capitalist system, which has been the principal agency of underdevelopment of Africa over the last five centuries.

As the reader will observe, the question of development strategy is tackled briefly in the final section by A.M. Babu, former Minister of Economic Affairs and Development Planning, who has been actively involved in fashioning policy along those lines in the Tanzanian context [n.b.: not included in this reprint].

It is no accident that the text as a whole has been written within Tanzania, where expressions of concern for development have been accompanied by considerably more positive action than in several other parts of the continent.

Many colleagues and comrades shared in the preparation of this work. Special thanks must go to comrades Karim Hirji and Henry Mapolu of the University of Dar es Salaam, who read the manuscript in a spirit of constructive criticism.

But, contrary to the fashion in most prefaces, I will not add that “all mistakes and shortcomings are entirely my responsibility.”

That is sheer bourgeois subjectivism. Responsibility in matters of these sorts is always collective, especially with regard to the remedying of shortcomings.

My thanks also go to the Tanzania Publishing House and Bogle L’Ouverture Publications for co-operating in producing this volume as simply and cheaply as possible. The purpose has been to try and reach Africans who wish to explore further the nature of their exploitation, rather than to satisfy the ‘standard, set by our oppressors and their spokesmen in the academic world.

Some Questions on Development

‘In contrast with the surging growth of the countries in our socialist camp and the development taking place, albeit much more slowly, in the majority of the capitalist countries, is the unquestionable fact that a large proportion of the so-called underdeveloped countries are in total stagnation, and that in some of them the rate of economic growth is lower than that of population increase.

‘These characteristics are not fortuitous; they correspond strictly to the nature of the capitalist system in full expansion, which transfers to the dependent countries the most abusive and barefaced forms of exploitation.

It must be clearly understood that the only way to solve the questions now besetting mankind is to eliminate completely the exploitation of dependent countries by developed capitalist countries, with all the consequences that this implies.’

Development in human society is a many-sided process. At the level of the individual, it implies increased skill and capacity, greater freedom, creativity, self-discipline, responsibility and material well-being.

Some of these are virtually moral categories and are difficult to evaluate – depending as they do on the age in which one lives, one’s class origins, and one’s personal code of what is right and what is wrong.

However, what is indisputable is that the achievement of any of those aspects of personal development is very much tied in with the state of the society as a whole. From earliest times, man found it convenient and necessary to come together in groups to hunt and for the sake of survival.

The relations which develop within any given social group are crucial to an understanding of the society as a whole: Freedom, responsibility, skill, etc. have real meaning only in terms of the relations of men in society.

Of course, each social group comes into contact with others. The relations between individuals in any two societies are regulated by the form of the two societies.

Their respective political structures are important because the ruling elements within each group are the ones that begin to dialogue, trade or fight, as the case may be.

At the level of social groups, therefore, development implies an increasing capacity to regulate both internal and external relationships. Much of human history has been a fight for survival against natural hazards and against real and imagined human enemies.

Development in the past has always meant the increase in the ability to guard the independence of the social group and indeed to infringe upon the freedom of others – something that often came about irrespective of the will of the persons within the societies involved.

Men are not the only beings that operate in groups, but the human species embarked upon a unique line of development because man had the capacity to make and use tools. The very act of making tools was a stimulus to increasing rationality rather than the consequence of a fully matured intellect.

In historical terms, man the worker was every bit as important as man the thinker because the work with tools liberated men from sheer physical necessity so that he could impose himself upon other more powerful species and upon nature itself.

The tools with which men work and the manner in which they organise their labour are both important indices of social development.

More often than not, the term ‘development’ is used in an exclusive economic sense – the justification being that the type of economy is itself an index of other social features. What then is economic development?

A society develops economically as its members increase jointly their capacity for dealing with the environment.

Taking a long-term view, it can be said that there has been constant economic development within human society since the origins of man, because man has multiplied enormously his capacity to win a living from nature.

The magnitude of man’s achievement is best understood by reflecting on the early history of human society and noting firstly, the progress from crude stone tools to the use of metals; secondly, the changeover from hunting and gathering wild fruit to the domestication of animals and the growing of food crops; and thirdly, the improvement in the character of work from being an individualistic activity towards an activity which assumes a social character through the participation of many.

Every people have shown a capacity for independently increasing their ability to live a more satisfactory life through exploiting the resources of nature.

Every continent independently participated in the early epochs of the extension of man’s control over his environment – which means in effect that every continent can point to a period of economic development.

Africa, being the original home of man, was a major participant in the processes in which human groups displayed an ever-increasing capacity to extract a living from the natural environment.

Indeed, in the early period, Africa was the focus of the physical development of man as such, as distinct from other living beings.

Development was universal because the conditions leading to each economic expansion were universal.

Everywhere, the man was faced with the task of survival by meeting fundamental material needs; and better tools were a consequence of the interplay between human beings and nature as part of the struggle for survival. Of course, human history is not a record of advances and nothing else.

There were periods in every part of the world when there were temporary setbacks and actual reduction of the capacity to produce basic necessities and other services for the population.

But the overall tendency was towards increased production, and at given points of time, the increase in the number of goods was associated with a change in the quality or character of society.

This will be shown later with reference to Africa, but to indicate the universal application of the principle of quantitative/qualitative change an example will be drawn from China.

Early man in China lived at the mercy of nature, and slowly discovered such basic things as the fact that fire can be man-made and that seeds of some grasses could be planted in the soil to meet food requirements.