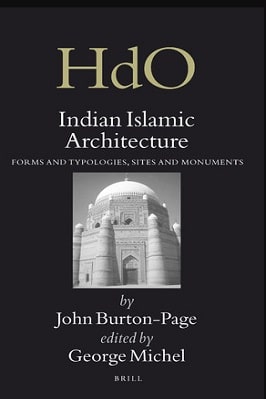 At the time of the Muslim conquest, India was a land with a rich artistic tradition: temples and monasteries abounded, Hindu shrines of all descriptions and sizes were found by almost every hillside and spring, cities were rich and well-planned, Hindu rulers had built for themselves forts and palaces, and the remains of earlier phases of Indian civilization—such as the Hindu, Buddhist and Jain cave-temples, and the Buddhist st[1]pas and monasteries—were numerous.

Architecture was characteristically of stone, its construction derived from timber prototypes: beams and lintels were supported on columns or brackets, and roofs tended to a stepped pyramidal shape, through having been built in diminishing horizontal courses. Domical shapes were known, often carried on octagonal bases, but were often solid and in any case had little structural affinity with the true voussoir-built dome.

The northern temples usually had curvilinear towers, again often solid; these, and some of the domical forms, had a characteristic crowning feature which later became part of the Indian Islamic dome decoration, a ribbed ring known as malaka (from the fruit it resembles, the Emblic Myrobalan, Phyllanthus emblica) surmounted by a pot-shaped moulding, the kalaa (lit. ‘water-jar’); to these a base of stone foliations in the form of lotus-petals might be added.

The entire ornamental feature was on occasions supported by ribs on the curvilinear towers, and it has been suggested that at least part of the origin of ribbed domes in India is to be found in this device.

The arch is not known at all as a structure, and only rarely as a decorative form, but recesses used freely on both internal and external walls lead to a proliferation of vertical lines and to unnecessary horizontal plinths and mouldings.

Window openings were rare: the interior of the Hindu temple was poorly lighted, its kernel being the secret shrine of an idol god whose mysteries were known only to a few initiated priests and were not for public display.

The exterior, however, was as luxuriant and prolix as the interior was esoteric and recondite, for all its surfaces were covered with a profusion of exuberant sculpture of iconographic significance, in which the human form preponderated. Free-standing statuary was also known, with the human form again dominant; but frequent also were the vehicles and attendants of the Hindu gods, especially Shiva’s bull, and also the linga, the representation of the phallus as the generative principle of the world.

There is as yet insufficient archaeological evidence of the first Islamic buildings on Indian soil which must have been produced by the conquest of Sindh in the 8th century, although excavation at present is being undertaken at Bhambor (Pakistan) and elsewhere may eventually reveal the site of Daybul. The buildings after the 12th-century conquest of the north, however, show the Muslims’ reaction to indigenous building very plainly; for the traditions of the idol-temples, with their plethora of 􀀂 orid figure representation, their gloom and secrecy, and above all the nature of the worship they implied, were not only anathema to Islam but were its direct antithesis.

The earliest phase of Muslim building is in Delhi, and is here represented by the re-use of pillaged material from Hindu and Jain temples; destruction of the religious buildings of the enemy is known, of course, in many religions other than Islam, and indeed in India, there is more than one record of a Hindu king doing just this to his neighbour’s lands.

Reutilization of the pillaged material is a feature of the initial phase of Muslim occupation in many regions of India, for example, at Ajmer and Jalor in Rajasthan; Bharoch, Cambay (Khambayat) and Patan in Gujarat; Jaunpur; Bijapur, Daulatabad and Warangal in the Deccan; Gaur (Lakhnauti), Pandua and Tribeni in Bengal; Dhar and Mandu in Malwa; and many other sites.

The first example, the Masjid Quwwat al-Islam at Delhi, is in fact built on a temple plinth, and some 27 temples were pillaged to provide columns, walls, roofing materials, and paving; sculptured figures were mutilated or were so set in walls that the unworked sides of the stones were all that could be seen.

This mosque was at first a plain enclosure, but in 595/1199, eight years after its foundation, a large maqra screen was erected between the western liw

n and the courtyard, and the arch appears for the first time: but these arches are corbelled out, not voussoired, and it appears that the work