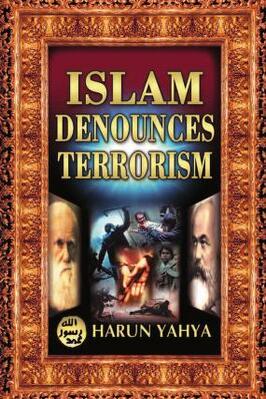 As Muslims, we strongly condemn the terrorist attacks on (wo major cities of the United States of America on September 11, 2001, which caused the death and injury of thousands of innocent people.

This book maintains that the source of the terror that we condemn is definitely not from a divine religion, and that there is no room for terrorism in Islam,

This is made clear in the Qur’an, the main source of Islam, and in the practices of all true Muslim rulers, the Prophet Muhammad being the foremost of them.

We need to keep in mind that, among those who were killed in New York and Washington, there were people who loved jesus (Christians), the Prophet Moses (lews) and the Prophet Muhammad (Muslims).

Unless forgiven by God, murdering innocent people is a great sin that leads to torment in Hell.

No one who is religious and fears God would do such a thing. Religion commands love, mercy and peace. Terror, on the other hand, is cruel, merciless and demands bloodshed and misery.

This being the case, the origins of terrorist acts should be sought in disbelief rather than in religion. Tire name or the identity of the triggerman is not important.

If he can kill innocent people without blinking an eye, then he is a nonbeliever, not a believer. For this reason, “Islamic terror” is an erroneous concept which contradicts the message of Islam.