Home » Islamic Philosophy from Its Origin to the Present pdf

Islamic Philosophy from Its Origin to the Present pdf 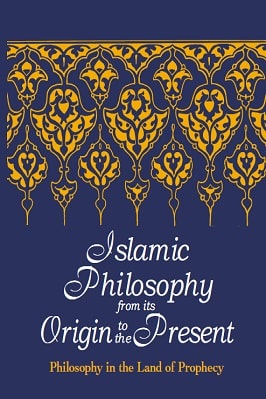 This book is the result of nearly fifty years of study and meditation upon philosophy and philosophical issues as seen in the light of the realities revealed through prophecy both objective and inward in the form of illumination.

In a world in which philosophy has become so divorced from revealed realities and secular thought has sought to marginalize and even annihilate knowledge imbued with the sacred, it is necessary to return, whenever possible, to the theme of the relation between philosophy and prophecy through different perspectives and angles of vision.

Years ago we dealt with the heart of the question of the relation between knowledge and the reality of the sacred in Knowledge ad the Sacred and have returned to this subject from other angles of vision in later works such as The Need for a Sacred Science.

In the present work, we turn our gaze specifically upon philosophy and especially Islamic philosophy.

We deal with over a millennium of Islamic philosophy, its doctrines, history, and approaches, from the angle of vision of the relation between that long philosophical tradition and the realities of prophecy that have always dominated the horizon of the Islamic cosmos and the intellectual climate and space of the Islamic people. Some of the chapters of this book were written as essays over the years.

They have all been thoroughly re- vised and integrated into the framework of this book.

Many other chapters are new and were written specifically as integral parts of the present work in order to complete the picture that we have sought to depict in the pages that follow.

In the current cultural climate in the West as well as other parts of the globe affected by modernism and postmodernism, philosophy and prophecy are seen as two very different and, in the eyes of many, antithetical approaches to the understanding of nature of reality. Such was not, however, the case in the various traditional civilizations preceding the advent of the modern world.

Nor is it the case even today to the extent that the traditional worldview has survived. Needless to say, by “prophecy” we do not mean foretelling of the future, but bringing a message from higher or deeper orders of reality to a particular human collectivity.

Now the modes of this function have differed from religion to religion, but the reality of “prophecy” is evident in worlds as diverse as the ancient Egyptian, the classical Greek, and the Hindu, not to speak of the Abrahamic monotheisms in which the role of prophecy is so central.

If we do not limit our understanding of prophecy to the Abrahamic view of it, we can see the presence of prophecy in very diverse religious climes in nearly all of which it is not only of a legal, ethical, and spiritual signiﬁcance but also of a sapiential one concerned with knowledge.

We see this reality in the world of the rishis in India and the shamans of diverse Shamanic religions as well as in the iatromantis of the Greek religion and the immortals of Taoism, in the illumination of the Buddha and later in the Zen Buddhist masters who have experienced illumination of satori, as well as the prophets of the Iranian religions such as Zoroaster and of course in the Abrahamic prophets.

Consequently in all of these worlds, whenever and wherever philosophy in its universal sense has ﬂourished, it has been related to prophesy in numerous ways.

Even if we limit the deﬁnition of philosophy to the intellectual activity in ancient Greece known by that name, an activity that the modern Western understanding of history considers being the origin of philosophical speculation as such, the rapport between philosophy and prophecy can be seen to be a very close one at the very moment of the genesis of Greek philosophy.

We also come to realize that the

Pythagoras, who is said to have coined the term philosophy, was certainly not an ordinary philosopher like Descartes or Kant.

He was said to have had extraordinary prophetic powers and was himself like a prophet who founded a new religious community.1 The Muslims in fact called him a monotheist (muwa÷÷id) and some referred to him as a prophet.

The person often called the “father” of Western logic and philosophy was Parmenides, who is usually presented as a rationalist who happened to have written a poem of mediocre quality.

But as the recent brilliant studies of Peter Kingsley have clearly demonstrated, far from being a rationalist in the modern sense, he was deeply immersed in the world of prophecy in its Greek religious sense and was a seer and visionary.2

In his poem, which contains his philosophical message, Parmenides is led to the other world by the Daughters of the Sun who came from the Mansion of Light situated at the farthest degree of existence.3

The answer to the question as to how this journey took place is “incubation,” a spiritual practice well known in Greek religion, one in which a person would rest completely still until his or her soul would be taken to higher levels of reality, and the mysteries of existence would be revealed.

Thus Parmenides undertakes the inner journey until he meets the goddess who teaches him everything of importance, that is, teaches him what is considered to be the origin of Greek philosophical speculation.

It is remarkable that when the goddess confronts Parmenides, she addresses him as kouros, that is, a young man.

This fact is remarkable and fascinating because in the Islamic tradition the very term for spiritual chivalry (futuwwah in Arabic and jawånmard¥ in Persian) is associated with the word for youth (fatå/jawån), and this spiritual chivalry is said to have existed before Islam and to have been given new life in Islam where its source is associated with ‘Al¥,4 who received it from the Prophet of Islam and where it was integrated into Suﬁsm. Furthermore, ‘Al¥ has been associated by traditional Islamic sources with the founding of Islamic metaphysics.

Another Greek ﬁgure who was given the title kouros was Epimenides of Crete who also journeyed to the other world where he met Justice and who brought back laws into this world. Like Parmenides, he also wrote poetry.

Now Epimenides was known as a healer-prophet or iatromantis to whom everything had been revealed through incubation while he lay motionless in a cave for years Parmenides was associated with this tradition.

The iatromantis journeyed into other worlds like shamans and not only described their journeys but also used language in such a way as to make this journey possible for others.

They used incantations and repetitions in their poems that we also see in Parmenides.

They also introduced stories and legends of the East even as far as Tibet and India, which is of great interest because the community of Parmenides in southern Italy itself hailed originally from the East in Anatolia where the god Apollo was held in special esteem as the divine model of the iatromantis whom he inspired as his prophets to compose hypnotic poetry containing knowledge of reality.

Excavations in recent decades in Velia in southern Italy, which was the home of Parmenides, have revealed inscriptions that connect him directly to Apollo and the iatromantis.

As Kingsley writes, “We are being shown Parmenides as a son of the god Apollo, allied to mysterious Iatromantis ﬁgures who were experts in the use of incantatory poetry and at making journeys into other worlds.”

If we remember that, esoterically speaking, “Apollo is not the god of light but the Light of God,”8 it becomes clear how deeply philosophy, as expounded by its Greek father Parmenides, was related at the moment of its genesis to prophesy even conceived in Abrahamic terms provided one does not overlook the inner meaning of prophecy to which we shall turn soon.

A whole tradition of healer priests was created in the service of Apollo Oulios (Apollo the Healer), and it is said that Parmenides was its founder.

It is interesting to note that although these aspects of Parmenides were later forgotten in the West, they were remembered in Islamic philosophy where Muslim historians of philosophy associate not only Islamic but also Greek philosophy closely with prophecy.

9 One must recall here the famous Arabic dictum yanba‘ al-÷ikmah min mishkåt al-nubuwwah, that is, “philosophy issues from the niche of prophecy.”

It is also of interest to note that the teacher of Parmenides is said to have been obscure and poor and that what he taught above all else to his student was stillness or hesychia.

This was so important that later ﬁgures such as Plato, who sought to understand Parmenides, used the term hesychia more than any other word to describe the latter’s understanding of reality. “For Parmenides it’s through stillness that we come to stillness.

Again it is of remarkable interest to remember the usage of ‘hesychia’ associated with the founder of Greek logic and philosophy in Hesychasm, which embodies the esoteric teachings of the Orthodox Church, teachings whose goal is the attainment of sanctity and gnosis.