Noble Dynasties – The History of Nur Ad-Din and Saladin pdf 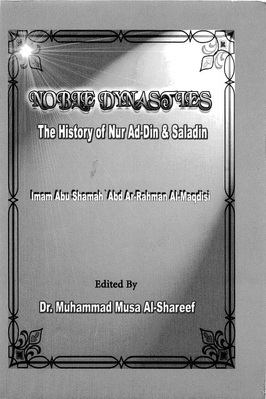 Noble Dynasties – The History of Nur Ad-Din and Saladin

We should revisit the past to learn lessons from it, every nation underwent significant landmarks in their history that highlighted great and talented men and women, and leaders who changed the course of history.

This book is a biography of some of those unique people who were renowned of their sincerity, magnanimous feats, and great influence.

‘They emerged when Islam was about to fade out and when the enemy was occupying more than half of the Levant.

The Muslims at that time were divided into small territories and were ruled by scanty autonomous governments. The caliphate in Cairo and Baghdad was only a name.

The Franks had occupied Muslim territories for more than fifty years. They were huge in number and backed by Europe.

The Muslims thought they were to live in this unceasing phase of trouble and strife.

Then along came two men who raised the banner of the Ever-Glorious Qur’an and awoke the people reminding them of their freedom. After that the Muslims had the upper hand and achieved a great victory.