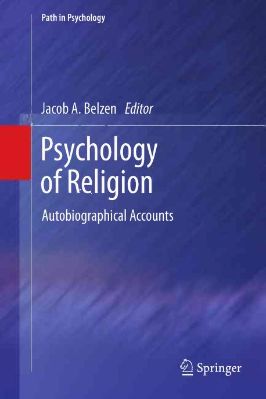 “The psychology of religion is back. It is alive and kicking!” If that were the main message of the present volume, or even of this introduction, one would immediately need to raise some critical questions.

We should at least ask why this assertion should count as special, as something worth mentioning, as anything new.

Is it, for example, “news” that this branch of psychology is “back?” Many psychologists have never heard anything about the psychology of religion; a great number of them would be sincerely amazed if one were to ask their opinion about it.

To the best of their knowledge, nothing like the “psychology of religion” exists; they wouldn’t have a clue what that is, could be, or should be.

And many contemporaries who are or would be interested in a scholarly approach to the study of religion would perhaps be equally puzzled upon hearing the claim this essay opens with:

unlike most present-day psychologists, they may have heard about the psychology of religion, but only as something from the past, as something the founding fathers of psychology at large had been involved in, but that, for whatever reasons, already no longer existed by World War I.

There have indeed been excellent scholars, well acquainted with the history of psychology, and themselves involved in the field of research on religion, who have declared the psychology of religion “dead” outright.

Benjamin Beit-Hallahmi, an Israeli-American psychologist who published extensive research on religion, asserted in 1974 in the leading Journal for the History of the Behavioral Sciences that the psychology of religion ceased to exist by 1930 (Beit-Hallahmi, 1974, p. 87).

And already in 1953, Jan Hendrik van den Berg, a leading international spokesman of the phenomenological movement in psychology and the first professor of psychology to be appointed at a Dutch theological faculty (Belzen, 2007), determined the “death” of psychology of religion to have occurred in 1921 (van den Berg, 1953, p. 36).

That claims such as those of Beit- Hallahmi and van den Berg can be and have been refuted (Belzen, 2008), is not an issue to enter into right now:

the existence and proliferation of their opinion is what matters here.

THE CURE OF ALL YOUR PROBLEMS AND WORRIES pdf