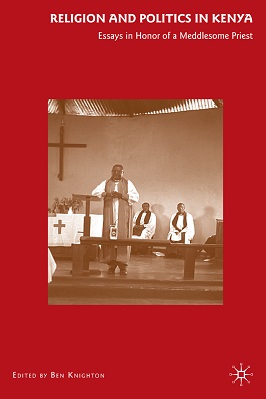 RELIGION AND POLITICS IN KENYA

Certainly, my research among contemporary pastoralist people (Knighton 2005a) does not show this to be a trite statement, but one supported by the profound overlap of religion and politics in personnel, functions, and institutions.

After all in a region of uncertain and uncontrolled environments and livelihoods, where the weak went to the wall, or rather to the hills minus their cattle (Sutton 1990; 1993), issues of power and religion were vital for the preservation or expansion of identities and solidarities, and autonomy in the limits that the transcendent would allow was the prized goal of each community.

With Arab and European invasions, the religions of traditional societies were not simply overrun by secular modernity.

The Arabs had little interest in proselytizing Africans beyond those who would prepare their food, while the European administrators, even if sons of the clergy,2 were frequently more animated by the secular trends of Victoriana or an ethnographic fascination sparked by Kipling or Rider Haggard.3

In East Africa, however, it should never be forgotten how vital the missionary contribution was, whatever its consequences. Evangelical Lutherans of the Church Missionary Society (CMS) arrived on the coast just when Arabs reached Buganda from there, and 33 years later, in 1877, they caught up with them, closely followed by Roman Catholic missionary orders. The most rudimentary imperial administration began under the British Foreign Office some 17 years later.4

The mere proposition of an Uganda Railway led to a host of missions from many denominations targeting the region, but it took six years to reach Lake Victoria;

so most of them, faced with an Anglican–Roman Catholic duopoly in Uganda by law established, stopped off in the East African Protectorate that became Kenya Colony in 1920 because of the European settlers who were considered necessary to make the railway pay. Thus, in many localities of Kenya, it was the missionary who took up residence before the district officer.

Roland Oliver’s (1952) book, The Missionary Factor in East Africa, which is seen as marking the birth of African Studies as a recognized cluster in the University, suitably highlights a factor more significant in Africa’s modern history than for other continents.

Missionaries were themselves obliged by exigency to engage in the political and military conflicts and settlement of the region. One CMS missionary, Bwana Stokes, traded in his evangelism for gunrunning in the Protestant cause in Uganda (Harman 1986).

While the administrators were finding their feet, budgets, and offices, the missionaries were working with Africans in the rural areas, attracting them with Western medicine, education, and religion.

Often there was mass interest at first, and even if it proved much harder to distill a group of committed converts, these were to become highly influential in the construction of the colonial state and in reactions to it. In religious terms, they can only be termed as fertile.

Not only did mission stations become permanent fixtures in the landscape, generally on hilltops for reasons of missionary health, but they also occasioned chains of reactions. Plural belonging was always a possibility stemming from the common practice of adhering to select ceremonies of both traditional and missionary religions.

Irreconcilable beliefs or personality disputes frequently resulted in schisms. Since the missions had worked so hard to break the politico-religious politics of the existing societies, picking up their transgressors as their most loyal converts (Karanja 1999), it is not surprising that Africans no longer saw a religious need for hegemony, especially that instituted by foreigners, moreover, foreigners who disagreed among themselves (Gatu 2006).