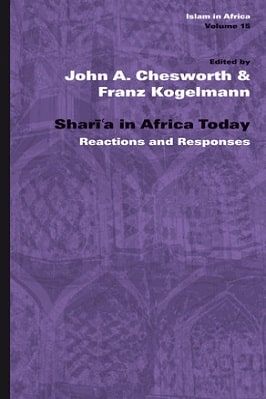 This book originated in a research project “Sharīʿa Debates and Their Perception by Christians and Muslims in Selected African Countries” in which a group of African junior scholars at different stages of their academic careers were invited to participate.

This research project was financed for three years (2006–2009) by Volkswagen Foundation under the funding initiative “Knowledge for Tomorrow—Co-operative Research Projects in Sub-Saharan Africa”. Most of the research and writing sponsored by the project has been done by these African junior scholars, who include both Muslims and Christians.

They have been closely supervised, assisted and evaluated by a group of senior scholars with a view to their proper training, their exposure to current ideas, methodologies, and milieus, and the enhancement of their formal academic qualifications.

The research here is reported on developed from a previous joint research project on the current sharīʿa debate in Nigeria, “The sharīʿa Debate and the Shaping of Muslim and Christian Identities in Northern Nigeria”. This was also funded by Volkswagen Foundation and organized by the Universities of Jos, Nigeria, and Bayreuth, Germany, in 2002/2004.

At an early stage of that research project, it became obvious that the sharīʿa debate in Nigeria is not a single and locally restricted phenomenon. In many other African countries with a Muslim population, heated public debates on certain aspects of Islamic law, and/or the relationship of Islam or religion in general and the state, are nowadays an important part of daily political life.

Thus, a preliminary workshop was held in Limuru, Kenya, in July 2004, where the basic idea for the new research project was to develop new theoretical bases and research methods to examine this current phenomenon in a series of African countries. To reach this objective it was first of all necessary to get a general idea of these recent developments.

Keeping in mind that debates on Islamic law are not limited to sub-Saharan countries in Africa, the organizers also invited scholars from Egypt, Iran and Malaysia to attend. Due to the multi-disciplinary