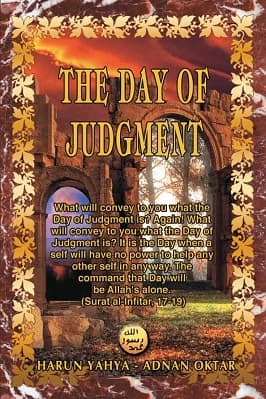 consider the people and events that shape your life. You are working hard to get somewhere, trying to find your place in the struggle for a good life. You are very attentive to some matters and reflect deeply upon them.

At the same time, you carefully avoid thinking about other matters and, as it happens, many people close to you do the same. Everyone knows what subjects to avoid in conversation and thought. Death is one of these, perhaps the most important one. For them, death is an “end” to which there is no solution.

The Day of Judgment, which will bring “death” to the universe just like the death of people, is a matter that most people do not like to think about; rather, they consider it as a remote and distant matter.

Most of them have a vague idea of what will happen on that Day, but since the thought of it scares them, most people are inclined to forget about it. Rather than facing up to it, they just get on with their lives instead.

People are most affected by the final day aspect of this Day for all beings, whether living or non-living.

The Day of Judgment is the final day of life on Earth and for the universe. But at the same time, it is the beginning of eternal life in the Hereafter. On that day, people will be resurrected, created anew.

The one who believes in Allah and the Hereafter and lives a sincere life will be hosted in Paradise, whereas unbelievers will be driven to Hell.

Therefore, for those who expect such a Day, fully aware of what this event means, it is meaningless to run away from death, the Day of Judgment, and the Hereafter. On the contrary, the reality of death and the events of that Day will lead people to do good in the cause of Allah, direct them to believe in the Hereafter, and bring them closer to Allah. Only the believers will be spared the great fear on that Day, on which previously unseen events will take place, for Allah reveals that they will have no cause for fear or sadness, for: