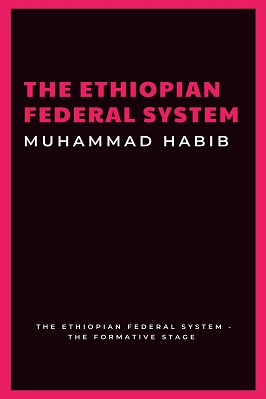 THE ETHIOPIAN FEDERAL SYSTEM – THE FORMATIVE STAGE BY MUHAMMAD HABIB

This monograph has been prepared to provide some broad outlines on the basic features of the emerging Ethiopian federal system.

This is done in the light of the historical experiences of the country, prior to the adoption of the federal system, and recent developments that seem to determine the existing structure of the system. Comparatively speaking, African experiences are taken into account due to their closer relevance to explain and understand the local developments in Ethiopia.

Moreover, as is the case in all federal systems, an attempt is made to shed light on the structure of the two levels of government including its respective constitutional mandate.

The laws of the country that provide the existing human rights regime are indicated in the light of the Constitution and the several international and regional human rights instruments ratified by Ethiopia.

Given the federal structure of the country, the need for maintaining a uniform national human rights standard, that respects peculiarities of the different states, Killiloch, has been emphasized with a view to maximizing the benefits of the grass-root population at the local level.

However, this monograph is of limited importance as it is intended to introduce the basic structures and recent developments of the emerging federal system in the context of Ethiopia.

Therefore, the limitation in providing a more detailed analysis has to be acknowledged from the outset. Hopefully, it may still help to understand the basic foundations laid by the Constitution for building a federal system in Ethiopia.

The section that relates to the pre-federal experience of the country may assist in comprehending the historical context in which the discourse on federalism has emerged in this country.

Again, the part which relates to the regional context of Africa may help to conceive and understand both the strength and limitations of the Ethiopian federal system in the wider regional context.

As such, despite its limited scope, this monograph may be found useful at least in understanding the different aspects of the discourse in its general sense.

The monograph has its own history. It began as an Amharic document a few months ago. But the publication and distribution of the Amharic text, which is relatively bigger than the English version, has not taken place.

But the English version is almost fully different as it covers recent developments and includes a more focused analysis, despite its brevity, on certain aspects of the discussion.

In preparing the Amharic monograph, I have been assisted by my former graduate students Syum Mesfin Syum, Tewedaj Melkamu, and Abdulkader Mohammed.

In their own right, these colleagues are knowledgeable scholars in their respective areas of specialization. The first two have graduated with MA degree in Federal Studies while the third obtained LL.M specializing in International Law, all of them from Addis Ababa University.

All of them assisted in compiling the data for the text prepared in Amharic.

This monograph is almost entirely different from the earlier Amharic text. The data utilized for this English text has been explored largely from new and more up-to-date sources.

In particular, the section on the comparative aspects that relate to past and present other African federal experiences is fully a new addition.

While maintaining the size as brief as it has come in the end, an attempt is made to enrich the data and refine the arguments so that the text could be at least fairly informative to the English-speaking audience.

In the course of conducting the research and preparing this monograph, Abdulkader Mohammed worked with me assisting the research process and also editing the full text from the beginning up to the end.

All these activities were accomplished within a very tight schedule that unfortunately did not allow to improve the text to a more desirable standard.

Therefore, our apology is in order for any shortcomings or oversight. Meanwhile, I would like to express my gratitude to Abdulkader Mohammed, including my admiration for his meticulous editing and unreserved research assistance.