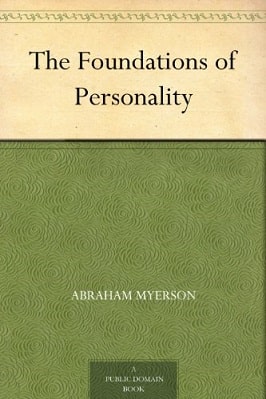 The Foundations of Personality by Abraham Myerson

THE FOUNDATIONS OF PERSONALITY BY ABRAHAM MYERSON

Man’s interest in the character is founded on an intensely practical need. In whatsoever relationship we deal with our fellows, we base our intercourse largely on our understanding of their characters.

The trader asks concerning his customer, “Is he honest?” and the teacher asks about the pupil, “Is he earnest?” The friend bases his friendship on his good opinion of his friend; the foe seeks to know the weak points in the hated one’s make-up; and the maiden yearning for her lover whispers to herself, “Is he true?”

Upon our success in reading the character of others, upon our understanding of ourselves hangs a good deal of our life’s success or failure.

Because the feelings are in part mirrored on the face and body, the experience of mankind has become crystallized in beliefs, opinions and systems of character reading which are based on physiognomy, the shape of the head, lines of the hand, gait and even the method of dress and the handwriting. Some of these all men believe in, at least in part.

For example, everyone judges character to a certain extent by facial expression, manner, carriage and dress. A few of the methods used have become organized into specialities, such as the study of the head or phrenology, and the study of the hand or palmistry.

All of these systems are really “materialistic” in that they postulate so close to a union of mind and body as to make them inseparable.

But there are grave difficulties in the way of character-judging by these methods. Take, for example, the study of physiognomy as a means to character understanding.

All the physiognomists, as well as the average man, look upon the high, wide brow as related to great intelligence.

And so it is–sometimes. But it is also found in connection with the disease of the brain, as in hydrocephalus, and in old cases of rickets. You may step into hospitals for the feeble-minded or for the insane and find here and there a high, noble brow.

Conversely, you may attend a scientific convention and find that the finest paper of the meeting will be read not by some Olympian-browed member, but by a man with a low, receding forehead, who nevertheless possesses a high-grade intellect.

So for centuries, men have recognized in the large aquiline nose a sign of power and ability. Napoleon’s famous dictum that no man with this type of proboscis is a fool has been accepted by many, most of whom, like Napoleon probably, have large aquiline noses.

The number of failures with this facial peculiarity has never been studied, nor has anyone remarked that many a highly successful man has a snub nose. And in fact, the only kind of nose that has a real character value is the one presenting no obstruction to breathing.

The assigned value given to a “pretty” nose has no relation to character, except as its owner is vain because of it.

One might go on indefinitely discussing the various features of the face and discovering that only a vague relationship to character existed.

The thick, moist lower lip is the sensual lip, say the physiognomists, but there are saints with sensual lips and chaste thoughts. Squinty eyes may indicate a shifty character, but more often they indicate conjunctivitis or some defect of the optical apparatus.

A square jaw indicates determination and courage, but a study of the faces of men who won medals in the war for heroism does not reveal a preponderance of square jaws.

In fact, man is a mosaic of characters, and a fine nature in one direction may be injured by a defect in another; even if one part of the face really did mean something definite, no one could figure out its character value because of the influence of other features–contradictory, inconsistent, supplementary.

Just as the wisest man of his day took bribes as Lord Chancellor, so the finest face may be invalidated by some disharmony, and a fatal weakness may disintegrate a splendid character.

Moreover, no one really studies faces disinterestedly, impartially, without prejudice.

We like or dislike too readily, we are blinded by the race, sex and age of the one studied, and, most fatal of all, we judge by standards of beauty that are totally misleading.

The sweetest face may hide the most arrant egoist, for facial beauty has very little to do with the nature behind the face. In fact, facial make-up is more influenced by diet, disease and racial tendency than by character.

THEORIES OF THE SECOND COMING OF CHRIST pdf download

Comparative Religious Studies, other, Other Religions

THE SECRET HISTORY OF THE OXFORD MOVEMENT pdf download