Home » The Grammar of English Grammars, by Goold Brown pdf

The Grammar of English Grammars, by Goold Brown pdf 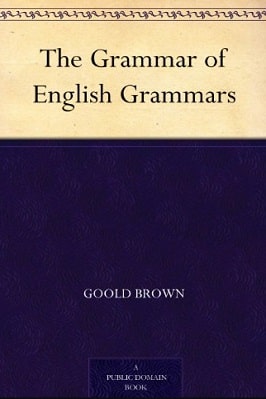 The Grammar of English Grammars, by Goold Brown

THE GRAMMAR OF ENGLISH GRAMMARS, BY GOOLD BROWN

The present performance is, so far as the end could be reached, the fulfilment of a design, formed about twenty-seven years ago, of one day, presenting to the world, if I might, something like a complete grammar of the English language;

not a mere work of criticism, nor yet a work too tame, indecisive, and uncritical; for, in books of either of these sorts, our libraries already abound;

not a mere philosophical investigation of what is general or universal in grammar, nor yet a minute detail of what forms only a part of our own philology; for either of these plans falls very far short of such a purpose;

not a mere grammatical compend, abstract, or compilation, sorting with other works already before the public; for, in the production of school grammars, the author had early performed his part; and, of small treatises on this subject, we have long had a superabundance rather than a lack.

After about fifteen years devoted chiefly to grammatical studies and exercises, during most of which time I had been alternately instructing youth in four different languages,

thinking it practicable to effect some improvement upon the manuals which explain our own,

I prepared and published, for the use of schools, a duodecimo volume of about three hundred pages; which, upon the presumption that its principles were conformable to the best usage, and well established thereby, I entitled, “The Institutes of English Grammar.”

Of this work, which, it is believed, has been gradually gaining in reputation and demand ever since its first publication, there is no occasion to say more here, than that it was the result of diligent study, and that it is, essentially, the nucleus, or the groundwork, of the present volume.

With much additional labour, the principles contained in the Institutes of English Grammar, have here been not only reaffirmed and rewritten, but occasionally improved in expression, or amplified in their details.

New topics, new definitions, new rules, have also been added; and all parts of the subject have been illustrated by a multiplicity of new examples and exercises, which it has