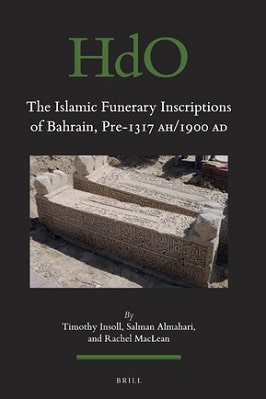 THE ISLAMIC FUNERARY INSCRIPTIONS OF BAHRAIN

This book presents a catalogue of the Islamic funerary inscriptions of Bahrain dating to before 1317 AH/1900 AD (all dates are specified as either AH or AD. Where both dates are cited these are in the format AH/AD).

It results from fieldwork completed between 2013 and 2015 undertaken in co-operation with the Bahraini Shiʿa Jaffaria Waqf and the Sunni Waqf authorities who provided information on the locations of relevant gravestones, personnel to participate in the recording, and ethical clearance and research authorisation (along with the Directorate of Archaeology and Heritage of the Bahrain Authority for Culture and Antiquities).

The excavations and surveys, and the ethnographic recording of contemporary cemetery visitation practices, cemetery material culture, and uses of the grave-stones were directed by Professor Timothy Insoll, assisted by Dr Salman Almahari and Dr Rachel MacLean and Mr Jassim Al-Abbas.

Following the advice of Professor Robert Hoyland, New York University, that the inscriptions should be transcribed into modern Arabic by those familiar with the formulae used, this was completed in Bahrain by Dr Salman Almahari of the Directorate of Archaeology and Heritage, Bahrain Authority for Culture and Antiquities, with Sheikh Bashar abd Alhadi Al-Ali, religious scholar, and Mr Jassim Al-Abbas, Head of Research at the Jaffaria Waqf Authority.

The Contents of the Book

Chapter 2 presents the gravestones in the form of a catalogue. It provides detail on each location where gravestones were recorded, and individual reference numbers, coordinates, dimensions, orientations, and descriptions for every gravestone, as well as an Arabic transcription and translation for all gravestone inscriptions.

No attempt is made to add historical context to the epitaphs and texts, the individuals commemorated, or to the places mentioned on the gravestones. This is to permit others to explore these themes, add this detail and use this epigraphic corpus for the purposes of their research unsullied by the previous studies.

Ishmael A natural history of Islamism and its relation to Christianity

AN APOLOGY FOR MOHAMMED AND THE KORAN pdf download