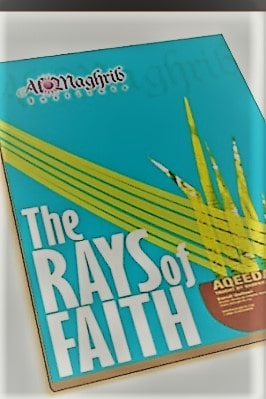 The rays of faith – Book Sample

THE RAYS OF FAITH

In Islam, the creed is directly taken from the Qur’an and the Sunnah of the prophet (SAW) unlike any other religion. There are only three ways someone can believe something:

See it (this is obvious)

Listen to someone trustworthy (e.g. The Qur’an and Sunnah).

Angel Jibreel (Gabriel) came to prophet (SAW) while he was sitting with his companion. Umar (RA) described that he was wearing very white cloth and had dark hair.

There were no signs of travel in him. He sat close to the prophet (SAW) and

He said, “Tell me about eman.”

He (the prophet SAW) replied, “It is to believe in Allah, His Angels, His Books, His Messengers, and the Last Day, and to believe in Divine Destiny (Al-Qadar), both the good and the evil of it.”

He said, “You have spoken rightly.”

The scholars divide the belief into these 6 (six) categories, i.e. believing in

The first pillar of Eemaan i.e. believing in Allah SWT is covered in detail in two separate AlMaghrib aqeedah courses.

The focus of this seminar is ‘belief in the five remaining pillars of Eemaan’.

Sheikh Waleed mentioned that the purpose of this seminar is to make us familiar with the Unseen world as these five pillars are from the unseen world. Even though the people in their time met the respective Messenger, to us it is also from the unseen.

Sheikh also included the discussion about the Jinn since this also is part of the unseen world.