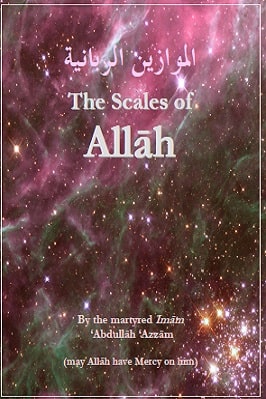 The Scales of Allah – Book Sample

THE SCALES OF ALLAH

The scales of jāhiliyyah place a man such as Bilāl (may Allāh be Pleased with him) at the same level as an animal such that the likes of Abū Sufyān bin Harb were embarrassed to simply sit in his presence, while the divine scales place him as is mentioned in ‘Sahīh Muslim,’13 that Bilāl, ‘Ammār, and Suhayb came across Abū Sufyān on the day Makkah was conquered, and they said some insulting words to him.

They said: “By Allāh, the swords of Allāh did not reach the enemies of Allāh as they should have.”

Abū Sufyān became angry and went to complain to Abū Bakr. So, Abū Bakr came to reprimand them harshly, saying: “Do you say this to the leader of Quraysh?” Abū Bakr then went off to inform the Messenger of Allāh (peace be upon him) of what Bilāl, ‘Ammār, and Suhayb had done.

Abū Bakr strained to hear just one word from the mouth of the Messenger of Allāh (peace be upon him) – one word of rebuke for them out of the desire to win the heart of Abū Sufyān, or to at least catch a glimpse of anger on the Prophet’s face for the anger of the leader of Quraysh, whose house was a place of safety for those who entered it on that day. Instead, the Messenger of Allāh (peace be upon him) applied the scales and said: “It might be that you made them angry, and made your Lord angry as a result.” O Allāh! What exaltation?!

What sky?! What greatness?! What a blessing that has raised this slave from the level of being like an animal in the scales of jāhiliyyah to the level of having the Lord of Glory become angry for his sake?! “Indeed, Allāh has men whose wishes He carries out, and it might be that a dirty, disheveled man would have his oath fulfilled by Allāh.”14

I say that when Abū Bakr heard these words from the Messenger of Allāh (peace be upon him), he was shaken: he might have angered Allāh by angering Bilāl!

So, he went back to Bilāl and ‘Ammār to reconcile with them, saying: “My brothers! It might be that I angered you.” They said: “May Allāh excuse you,” causing his emotional stress to be relieved and his heart to be relaxed.

On the same day, as Ibn Hishām reported in his ‘Sīrah’15 – on the day that Makkah was conquered – the Messenger of Allāh (peace be upon him) commanded Bilāl to climb on top of the Ka’bah to make the call of ‘Allāhu Akbar’ throughout all the corners of Makkah. So, Bilāl made this call, and its corners shook before this mighty call that shakes all creatures.

In ‘Sharh Sahīh Muslim’ (8/346), an-Nawawī explained this hadīth, saying: “This means that if he swore that something would occur, Allāh would make it occur out of honor for him, by fulfilling his request and protecting him from having violated an oath.

This is due to his great status with Allāh, even if he is worthless in the eyes of the people. It has also been said that his oath is his supplication, and the fulfillment is this supplication being answered, and Allāh Knows best.”

Everywhere, the call of ‘Allāhu Akbar’ shook all that stood before it. Three of the leaders of Quraysh were sitting with each other: ‘Itāb bin Usayd, Abū Sufyān bin al-Hārith, and al- Hārith bin Hishām. al-Hārith – one of those who were pardoned by the Messenger of Allāh (peace be upon him) that day – said: “Praise be to Allāh who took the life of Hishām before he could witness a day like this.”

A second man said: “He did not find except this black one to climb the roof of the Ka’bah?” And Abū Sufyān said: “As for me, I will say nothing.”

This is the scale of the people. He praised Allāh that his father died before seeing a black man on top of the Ka’bah, and on the same day, another scale says: “If you have angered Bilāl, you have angered your Lord.”

The heavens and the Earth shake if this slave is angered, and the corners of the Earth shudder if his face were to frown in sadness.

These people of jāhiliyyah go about blindly in their deception and transgression. They think that there is room on Earth for their scales, and therefore use them, and Allāh rejects except that His Light is completed.

Indeed, the establishment of the scales of Allāh on this Earth is a difficult task, and none can deal with it except those who have strong souls, and except the cream of humanity.

When you condition your soul to withstand the sting of tests and the heat of tribulations, it will then be ready for the path and be obedient to directives.

My brothers, the more you utilize the scales of Allāh – and it will not be used except upon the hands of those who lived for a long time through tests and trials, through conditioning and guidance – the more you will see justice on Earth, and the more your soul will become relaxed.

And these things become blurry for the people who distance themselves from using the divine scales, the scale of: