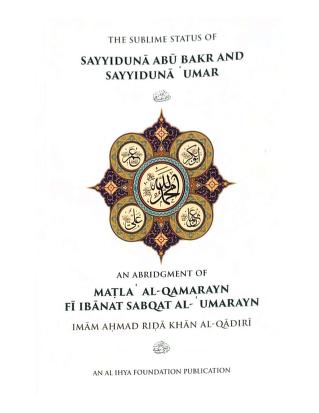 The Sublime Status of Sayyiduna Abu Bakr and Sayyiduna Umar

Allah chose the best of people for the companionship of His Prophets and Messengers so that they would learn their teachings, manners, and character, emulate them and transmit this inheritance to the next generation.

Since the religion of Islam is to remain until the end of time, Allah chose these individuals to be blessed with the companionship of His Prophet who would teach the next generation so that the teachings would remain until the Last Day.

It is for this reason that Sayyiduna ‘Abd-Allah ibn Mas‘ad said, “Indeed Allah looked into the hearts of the servants and found the heart of Prophet Muhammad # to be the best of the hearts of His servants, and so He chose him 4 for Himself and sent him # as a Messenger.

Sayyiduna Ibn “Abbas «s sought permission to enter. She sent a message that she was feeling apprehensive. Sayyiduna Ibn ‘Abbas « said, “I am not from those who return without meeting!” So she allowed him to enter.

She then said, “You have removed my sorrow, may Allah remove your sorrows.”8 And in another Hadith, the Prophet of Allah # has said, “Fear Allah regarding my Companions!

A lover will always find the best possible people for the companionship of his beloved.

The disposition of people varies – some people accept guidance through love and affection, while others through might and firmness.

So through Divine Wisdom, the Companions of the Prophet #: had different temperaments and personalities; some became known for their gentleness while others for their strictness. Some Companions had more Jamal (beauty and

The Excellences of the Family of the prophet

Any form of connection with the Prophet of Allah is an honor in both Worlds. Once a man saw a descendant of an Ansari, who was an erudite scholar of Hadith in a dream.

He asked, “How has Allah dealt with you?” He replied, “He forgave me.” The man asked, “For what reason?” The descendant of the Ansari replied, “Because of the relationship I had with the Messenger of Allah.” The man inquired, “Are you from his family?” He answered, “No.”

The man asked, “Then what is the nature of your relationship?” The Ansari replied, “Like a sheepdog to a shepherd.”27

The Scholars have explained the similitude as being rooted in the Prophetic saying, “The closest people to me on the Day of Judgement will be the ones who sent the most salutations upon me.”

And the most salutations are sent by the Scholars of Hadith. Qurayshi slave who drank the blessed blood of the Prophet & was (by this nisba) guaranteed freedom from the hellfire.29

If a slave was freed from the hellfire due to merely drinking the blessed blood then what is the status of those individuals who are formed from the very same blood like that of the Messenger of Allah &, i.e. those in whose bodies flows the blessed and sacred Prophetic blood?

The great Imām and Mujaddid (Reviver of the Religion), Shaykh Aḥmad Riḍā Khān, wrote Muntahā al-Tafṣīl li Mabḥath al-Tafḍīl, a masterpiece making abundantly clear from verses of the Holy Qur’ān, the Aḥādīth and the statements of the scholars, the pre-eminent stations of Sayyidunā Abū Bakr and Sayyidunā ʿUmar among the Companions.

This work spans 90 juz’; however, fearing its length would be arduous on readers, the erudite Imām penned an abridgment entitled, Maṭlaʿ al-Qamarayn fī Ibānat Sabqat al-ʿUmarayn.

Using 69 verses of the Holy Qur’ān, 235 Aḥādīth, and numerous statements of the luminary scholars of the past, Imām Aḥmad Riḍā proves the pre-eminent rank of the two greatest Companions, namely Sayyidunā Abū Bakr and Sayyidunā ʿUmar.

Imām Ahmad Ridā Khān, (b. 1272 AH/1856 CE), alayhi ar-Rahman w’al-Ridwan, was a renowned Hanafī jurist, hadīth expert and theologian par excellence, recognized by scholars from the Islamic world to be a reviver of his era.  He was a prolific writer whose legal edicts were gathered into twelve encyclopedic volumes and covered almost every science of his day.