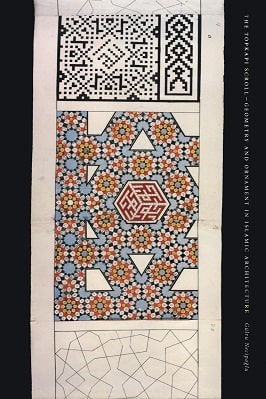 Drawings can reveal much about architectural practice and design methods, particularly when

a building tradition lacks theoretical treatises; the Islamic architectural heritage is a case in point. In the premodern Muslim world references to archi­tecture were often embedded in a wide variety of nonarchitectural texts and “how-to” manuals providing simple instructions without theoretical elaboration. These were complemented by collec­tions of workshop drawings, jealously guarded

by master builders as privileged information, and by the oral workshop, traditions passed on from master to apprentice over the generations.

the conceptualization and transmission of archi­tectural knowledge in the Islamic world; through these drawings one can begin to penetrate the theory and praxis of architecture and ornament.

The scroll preserved at the Topkap1 Palace Museum Library and reproduced in its entirety in this volume is an important discovery with major implications for Islamic and general architectural history. In addition to the information it pro­vides about architectural practice, the scroll also raises broader questions pertaining to the inter­action between science and art and promises to be relevant for theories of ornament, abstraction, aesthetics, and vision.

My decision to publish this rare document, which I ascribe to late fifteenth-or sixteenth-century Iran, was prompted by the necessity of making it accessible in its original form to a wide audience, both specialists in the Islamic field and nonspecialists.

The scarcity of information about architectural drafting methods in the Islamic world, which

are often assumed to have been nonexistent, adds to the significance of the Topkap1 scroll, the ear­liest known document of its kind.

Although this scroll throws new light on how architectural design was geometrically conceptualized, recorded, and transmitted in the particular context of late medieval Iran, it also raises more general questions about the mode of geometric patterning that dominated architectural revetments throughout the Islamic world between the eleventh and the early sixteenth centuries.

The scroll’s geometric language parallels that of late Gothic architectural drawings, a parallel informed by a shared late antique cultural heritage that often engendered similar design methods and aesthetic sensibilities. No doubt Byzantine architectural practice, too, grew out of this tradi­tion, but unlike the medieval building practice

of Europe, which is relatively well documented by extant workshop drawings from the thirteenth century onward, that of Byzantium remains largely undocumented.

This is why I have chosen to focus on comparisons with the Latin West, only refer­ring to the Byzantine architectural tradition when the relevant information was available.