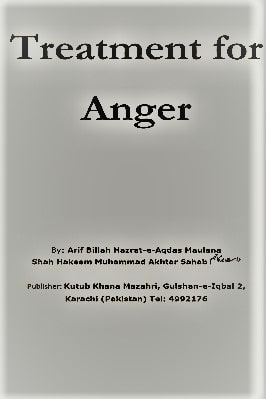 This lecture, “Treatment for Anger”, is a collection of three lectures of Hadhrat Moulana Hakeem Muhammed Akhtar Sahib Damat Barakatuhum. The first lecture was delivered on the 29th of Shawwal, 1407, coinciding with the 29 June 1987, Friday, at 11 am in Masjid Ashraf, Khanqah Imdadia Ashrafiyyah, Gulshan Iqbal, Karachi.

The second lecture was delivered at Dera Gazi Khan on the 9th Jamadus Thani 1408, coinciding with 29 January 1988 when he was on a journey with Hadhrat Aqdas Moulana Shah Abrarul Haq Sahib Damat Barakatuhum to Lahore, Faizalabad, Rawalpindi, Dera Gazi Khan, Multan and Peshawer.

The third lecture on the same topic, again, was delivered at Musjid Ashraf, Khanqah Imdadia Ashrafiyyah on 30th Ramadan 1408, coinciding with 19th May 1988, Tuesday, after Fajr. All three lectures have been collected in one book.

It is really a very unusually benefiting topic and a most valuable prescription of the treatment of the illness of anger. This booklet was initially published in Urdu, but for the benefit of English readers, it has been translated. May Allah Ta’ala bless it with acceptance. Amin.

Anger is not a bad thing, but to use it in a wrong place is bad. If anger is annihilated, then how will one make jihad with the kuffar? Therefore, use anger in the right place, eg. in jihad against the kuffar.

When at such a time, someone comes and says, “I humbly present myself in front of you,” it will be forbidden to treat him with humility, but rather say, “Is there anyone to confront me?” However, when anger is concerning oneself, then the following verse will apply to him, “Men of Allah are those who swallow their anger and control themselves.”

Many times, people request for some prayers whereby evil thoughts, inspirations and feelings do not occur to them, as the Urdu saying goes – “The flute must not remain, nor the flautist.”

This is childishness. Actually, perfection and intelligence is to trample the evil inspirations, not to act upon them, just for the pleasure of Allah.

Anyone who goes through a lot of difficulties and suffering for your sake, will you not think him to be your very best friend?

Therefore, one has to escape from or overpower these demands, for if you cannot do this, then it is proof enough that you do not want to go through difficulties for the sake of Allah. How then can this be a claim of love? One of the rights of love is that one goes through all difficulties for the pleasure of the beloved.

Therefore, these demands and urges must remain, otherwise how will one fulfil his wife’s rights in a permitted manner, which means not using one’s urges in the wrong manner.

Moulana Thanwi Rahmatullahi Alai used to say that the intention is not to destroy bad habits, but to channelize them in the correct direction. For example, someone has anger in him which is a bad habit.

Before his reformation he used it for himself, i.e if someone told him something unbecoming, or he was harmed by someone, he immediately lost control and let out his anger. But after he reformed, the direction of his anger changed.

Now he gets angry on witnessing the disobedience of Allah and his enmity is now directed towards the enemies of Allah.

If after reformation, the ‘SELF’ (nafs) encourages towards sin, then he lets out his anger on it, saying he will not allow it to sin! So anger is there, but its direction is now changed, which is praiseworthy and a commendable action.

Now, what is the meaning of “Kazm” and for what was is it used by the Arabs? The Quran has been revealed in the Arabic language. Allamah Aloosi As Sayyid Mahmood, the Mufti of Baghdad has explained this in his commentary, Roohul Ma’ani, that “Kazm” means to fasten a string around the mouth of a water bag which is filled to the brim.

Thus Allah Ta’ala states that when anger surges up in you, before you begin to talk vulgarly, swear and speak anything harmful, immediately tie your mouth up with the string of “Kazm”.

Now, let us see what is the difference of “Ghaiz” and “Ghadhab”. Sometimes, the workers in the office speak amongst themselves that “today the boss is fuming with