Home » Warning Against the Fitnah of Takfeer pdf download 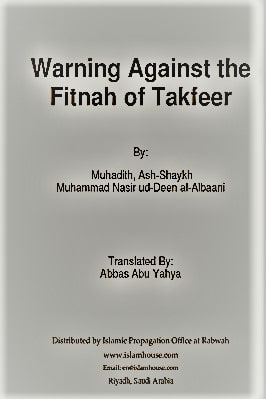 Warning Against the Fitnah of Takfeer

WARNING AGAINST THE FITNAH OF TAKFEER

A Kufr less than Kufr

Now we return to this Ayah:

“and whosoever does not judge with what Allaah has revealed so they are the kaafiroon.”

So what is the intent of the word (al-kufr ) here? Does it take one outside of the Muslim Ummah or does it mean something else?

I say: It is necessary to have precision in understanding this Ayah. The Ayah could mean the kufr of action and that is leaving off some of the actions from the rulings of Islaam.

In addition, what helps us in this understanding is the scholar of the Ummah and the interpreter of the Qur’aan, Abdullah bin Abbas -may Allaah be pleased with him. He was from the Companions that all Muslims are in agreement – except those who are from the deviant sects – that he is an Imaam in tafseer.

It is as if he heard in those days, the likes of what we hear today exactly, that there are people who understand the Aayaat on its apparent meaning without its explanation.

Perhaps he means the khawaarij – who rebelled against, the Ameer ul-Mumineen Ali – may Allaah be please with him – and as a result of that they spilled the blood of the Believers, and they did to the Believers what is not done even by the Mushrikeen. Ibn Abbas said: “The matter is not like what they have said or what they presume but indeed it is a kufr less than kufr.”

This is the clear, precise answer from the explainer of the Qur’aan. The explanation of the Ayah, from which it is not possible to have an understanding other than this (i.e. kufr less than kufr) from the texts of the Qur’aan and the Sunnah, this is what we indicated towards previously in the beginning of this speech.

Indeed the word al-kufr, which is mentioned in many Quraanic texts and ahadeeth, is not possible to explain – regarding all these texts – that the meaning is equal to exiting outside of the Ummah.

Like this is the example of the well-known hadeeth which is in the two authentic books of hadeeth (Saheeh Bukhari and Saheeh Muslim) on the authority of Abdullah bin Mas’ood -may Allaah be pleased with him – said that the Messenger of Allaah – SallAllaahu alayhi wa sallam – said:

“Cursing a Muslim is fassooq (sinful) and killing him is kufr.”

So the kufr mentioned here is sinning and it is disobedience, and the Messenger – SallAllaahu alayhi wa sallam – who is regarded as the most eloquent in expression – was

intense in expressing rebuke, and he said: “…….. and killing him is kufr.”

From another angle we can question, is it possible for us to understand from the first section of this hadeeth – “Cursing a Muslim is fassooq…………” with the same word

fisq (sin) which is mentioned in the previous Ayah with the third wording:

This hadeeth emphasizes that the kufr here could be with this meaning; because Allaah Azza wa Jaal mentioned:

“And if two parties among the believers fall into fighting, then make peace between them both, but if one of them rebels against the other, then fight against the one that which rebels till it complies with the command of Allaah.”

Indeed here our Lord has mentioned the rebel sect which fights the truthful believing sect, and along with this Allaah did not judge upon the rebel sect that they were kuffar, even though the hadeeth says: “. . . killing him is kufr.”

Therefore killing him is a kufr lesser than kufr, exactly like Ibn Abbas said in the explanation of the previous Ayah.

From here comes the precise detailed exposition whose explanation and commentary was given by the Imaam in truth, the Shaykh of Islaam Ibn Taymeeyah – may Allaah have mercy on him – and then after him his devoted student Ibn Qayeem al-Jawzeeyah who took on this responsibility.

Since they were blessed in making aware and explaining the division of kufr into these two divisions, whose banner was raised by the explainer of the Qur’aan with those concise and complete words.

Ibn Taymeeyah – may Allaah have mercy on him- and his student and companion Ibn al-Qayeem always repeatedly mentioned the necessity of distinguishing between the kufr of action and kufr of belief. Otherwise the Muslim would fall into, without knowing, the fitnah of rebelling against the community of Muslims, into which fell the khawaarij of old and some of their adherents of today.

The summary of this is: indeed his – SallAllaahu alayhi wa sallam – saying, “… killing him is kufr” does not mean, – in absolute terms – going out of the Ummah. There are many hadeeth regarding this. All these hadeeeth are irrefutable evidence upon those who

only hold their own deficient understanding of this previous Ayah, and cling to the explanation that this is kufr of belief.

For now, this hadeeth is sufficient for us, because it is a definitive proof that a Muslim killing his brother Muslim is kufr with the meaning: kufr of action and it is not the kufr of belief!

Then this is built upon their evil view, which is they say: that these people have perpetrated a sin, so they have become kuffar because of that.

The Relationship between Takfeer & Rebellion

From the general matters which are beneficial to mention and narrate: I met some of those who used to be from Jamaaat al- Takfeer then Allaah Azza wa Jaal guided them.

What do you think about making Takfeer of the teachers of the knowledge of the Sharia’ in schools, and other places, for example?

They said: they are kuffar because they are pleased with the rule of the rulers who judge without what Allaah has revealed!!!

And that the ruling of the Sharia’ from the text of the Book and Sunnah is not appropriate to be applied, then there is no doubt that this kufr of this ruler is the kufr of belief and is not the kufr of action alone, and whoever is pleased with this, and believes it, then he also falls into the same group.

Then I said to them: Firstly, it is not possible for you to make a judgment upon every ruler who rules with the western kufr laws or with even some of them, and that if they were questioned about judging with other than what Allaah has revealed?!

They would answer; that ruling with these rules is the truth and correct in this time! And it is not allowed to rule with the rules of Islaam!! Otherwise, if they say this, they would – truly- become kuffar without doubt or suspicion!

Then, if we came down to the people who are ruled, and from amongst them there are the scholars, amongst them are the righteous people etc. So how can you judge upon them with kufr just because you see them living under the rule, which includes them just as it includes you exactly!

But you declare them to be kuffar, and apostates and that ruling with what Allaah has revealed is obligatory!

Then you make an excuse for yourselves and contradict yourselves: that differing with the judgments of the Sharia’ with mere actions does not deem necessarily the ruling on the one who differs with the Sharia’ that he is an apostate from his Deen!