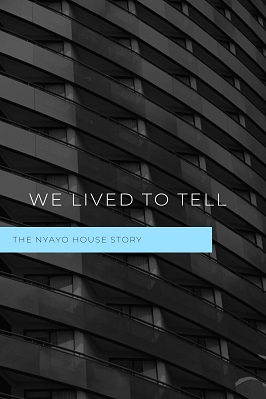 We Lived To Tell  – The Nyayo House Story by Shem Ogola

WE LIVED TO TELL  – THE NYAYO HOUSE STORY

Shem Ogola stood in the middle of the small crowd that had gathered to witness the opening of the basement of perhaps the most well-known building in Kenya. And in the glare of world television cameras, he broke down in a flood of tears. His body shook. Choked with emotion, he started talking to himself.

This sight elicited different emotions. Some cried, some sat down, some climbed on tables, others just walked out, each lost in their own thoughts.

Through Ogola, a torture survivor, Nyayo House’s torture chambers gained a human face. For his fellow survivors, the scene transported them back to their days in the dungeons. Nyayo House became alive again. In different ways, each relived the horrors they survived. For some it was the beatings, others the starvation, days spent in water, humiliation, threats, and mental torture.

For those lucky enough to have escaped Nyayo House, the event threw wide open the door to the closet that contained the most fearsome symbol of Daniel Arap Moi’s despotic rule spanning more than 24 years.

The occasion became a revelation into the past, a window through which Kenyans glimpsed into their country’s dark history. For many, the Nyayo House dungeons and the horror stories emanating from there were mere fiction until that day.

The nation went into shock. Kenyans had heard about the torture and abuse of pro-democracy activists which had become a frightening trademark of the Moi regime, but seeing the inside of the horror house itself brought home the gruesome reality in a way nothing else could.

Eager Kenyans burst into the basement compartments that they either did not know or did not believe existed. The media went into full action. The true character of the defeated regime of Moi had been laid bare.

When it smelt electoral defeat, the Moi regime seemed to have tried to obliterate the truth of the Nyayo House basement dungeons by attempting to demolish them.

However, that was not possible because the cells had been factored into the integrity of the superstructure of the building. Those bent on erasing the truth were told that demolishing the cells would undermine the foundation and the building might collapse. That is how the truth survived.

The pitch-dark dungeons had been home to many Kenyans. They included students, teachers,

They had all been hounded by enthusiastic hirelings of Moi, blindfolded, driven to the dungeons,

thrown into the black or red cells, and tortured for days on end.

Water would be poured into the cell and cold and then hot dusty air would be pumped alternately into the cells through the ventilation ducts. The victims would be denied food and for days they would be brutally beaten. Others were shot dead as they underwent interrogation.

Those who survived this stage ended up in prison or detention after kangaroo trials of sedition or treason. Yet others, after giving names to their friends or relatives, would be allowed to go home.

“It negates the very fundamental basis of democracy and short of execution, it is the ultimate form of repression. A nation that detains its own citizens without trial cannot be a democratic one.Rather, it is a sadistic one, which delights in the pain and suffering of its people.For deten- tion without trial is grotesque, it is despicable. ”

But for all who went through the experience and survived to tell it, an indelible mark of physical and mental trauma still lingers. For those who died, a hollow feeling of helplessness and anguish haunts families, relatives, and friends.

Historically, the only parallels that can be drawn to the torture chambers are British colonial concentration camps during the Mau Mau war.

The British developed and perfected the best-known torture machinery in the world.

This machinery included concentration camps where many Kenyans perished from various forms of torture including mass starvation, neglect, disease, and gruesome violence

Nyayo torture chambers were meticulously planned and built, using public funds of course, specifically for purposes of torturing and killing Kenyans who were deemed to be enemies of the Kanu regime.

The ultimate objective was to crush the culture and spirit of resistance to the Moi dictatorship that was behaving as if Kenya and its people, as well as resources, were the private property of the ruling elite.

It is obvious that the building of this heinous facility and many others like it was planned, funded, and implemented with approval from the highest offices in the land. As every Kenyan has noticed, the building was appropriately named Nyayo House.

That name personifies the chief architect and overseer of decades of the repression Kenyans have endured. Nyayo (footsteps) was the name president Moi fondly gave himself when he assumed power in 1978. It was meant to signify his intention to follow the bloody footsteps of his mentor and first president of Kenya, Mzee Jomo Kenyatta.

We Lived to Tell documents experiences of some survivors and families of victims of Nyayo House torture dungeons. The book tells the harrowing stories of the suffering they underwent in the hands of various state agents and institutions beginning in 1982 through the 1990s.

The ruling KANU clique perceived those they took through the dungeons to be a threat to their political survival. In a vicious campaign orchestrated and oiled by operatives of the ruling party KANU, they were portrayed as dissidents, subversives, traitors, terrorists, and unpatriotic people whose aim was to destabilize the country.

The propaganda Machinery of Moi and Kanu went in top gear to demonize those who championed human rights and democracy as violent agents of foreign powers out to create chaos and mayhem in the country.

On assuming power in 1978, Moi declared that nothing had changed. He was to simply follow in the late Kenyatta’s footsteps (nyayo), hence his Fuata Nyayo(follow the footsteps) clarion call. Through a populist approach, Moi disbanded and banned many organizations. These included the Kenya Civil Servants’Union, Students Organisation of Nairobi University (SONU), and Universities’Academic Union (UAU), among others.

Soon Moi resumed detentions without trial even though he had received undue credit for releasing those detained by his predecessor among them Prof. Ngugi Wa Thiong’s, Adam Mathenge, and Martin Shikuku.

After banning the Universities’Academic Staff Union, Moi detained its leadership who included Dr.Willy Mutunga, Kamonji Wachira, Prof. Al Amin Mazrui, Prof.Edward Oyugi, Maina wa Kinyatti and Mukaru Ng’ang’a. This was meant to send a message to progressive Kenyans, particularly within the university community, that the new Nyayo era expected everybody to “fuata nyayo”.

Dissent and independent opinion and views would not be tolerated. By immediately resorting to the extreme method of detention without trial as his first action against perceived dissidents Moi wasalso telling Kenyans to expect the very worst should they ever cross the line.

The hope within the regime was that this would silence everybody and nip the budding voices of opposition before they grew louder.

As history testifies democratic Kenyans refused to be silenced and soon Moi was busy sending more patriotic Kenyans into detention under the Preservation of Public Security Act, Cap. 57 of the Laws of Kenya, sections of which have since been repealed to remove detention without trial, and the Public Order Act Cap 56 Section 83 of the Constitution. Those detained in the second wave of arrests of the Moi regime included George Moseti Anyone, Koigi wa Wamwere, and John Khaminwa.

These detentions followed indications that a group of Kenyans was in the process of forming a political party to challenge the Kanu government.