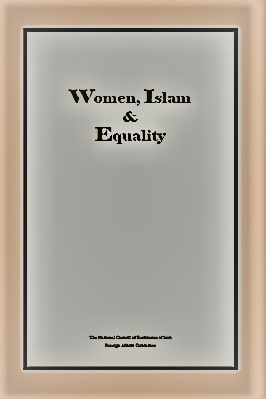 A Century-long Quest for Equality

The Persian women since 1907 had become almost at a bound the most progressive, not to say radical, in the world. That this statement upsets the ideas of centuries makes no difference…

Having themselves suffered from a double form of oppression, political and social… they broke through some of the most sacred customs which for centuries past have bound their sex in the land of Iran.

The tragic plight of women in Iran today reflects not their acquiescence to the misogynist mullahs, but the degree to which the clerics find the oppression of women vital to their survival.

This vengeance, equivalent by modern-day standards to gender-based apartheid, in turn demonstrates the need to keep, at all costs, an ever tighter lid on a potentially explosive social force that has frequently and profoundly affected various popular movements against the status quo in the past century.

Iranian women have always played an important part in their society, and their resistance is very much synonymous with their nation’s struggle for democracy and human rights, dating back to the dawn of the 20th century.

They were the first women in the Islamic world to struggle to attain an equal say and standing in society. As William Morgan Shuster, an American who lived in Iran in the early 20th century,

wrote in 1912 in his book, The Strangling of Persia: “The Persian women since 1907 had become almost at a bound the most progressive, not to say radical, in the world.

That this statement upsets the ideas of centuries makes no difference. It is the fact. It is not too much to say that without the powerful moral force of those women… the ill-starred and short-

lived revolutionary movement,… would have early paled into a more disorganized protest. The women did much to keep the spirit of liberty alive.

Having themselves suffered from a double form of oppression, political and social, they were the more eager to foment the great Nationalist movement…in their struggle for liberty and its modern expressions, they broke through some of the most sacred customs which for centuries past have bound their sex in the land of Iran.”2

Women’s prominent role in social movements in Iran began long before the 19th century. With the spread of Islam to Persia, the interaction between Persian nationalism and Shiite Islam’s defiant outlook gave impetus to many movements which rebelled against the oppressive status-quo.

Women actively took part in many of these movements, which surfaced from 11th to 15th centuries, including the Sanbad movement in Neyshabur, Moqane’ and Sarbedaran, in Khorassan province (northeast), Ostadsis in Sistan (southeast), and Babak in Azerbaijan, (northwest).3

The rise to power of the Safavid Dynasty (1502-1736), which espoused a backward, rigid interpretation of Islam, particularly toward women, brought with it the demise of progressive movements, and for that matter women’s participation in the social setting.

The emergence of women’s movements in Europe and America 4 in the latter years of the nineteenth and beginning of the 20th century, revived the spirit of social activism in Iranian women, whose potential for defiance was far greater than that of their male counterparts.

The first rebellion occurred exactly one hundred years ago, and is known as the “Tobacco Movement.” When in 1895, the Qajar monarch, Nasser od-Din shah, gave the exclusive rights for tobacco production and sale to the British firm, Rejie, the populace vehemently objected and boycotted the use of tobacco, forcing the king to annul the agreement. Iranian women were at the forefront of this resistance.

At the peak of the protests, Amin ol-Soltan, the Court-appointed chancellor, tried to convince and coerce the citizenry to end their rebellion. Hundreds of women charged forward, calling on their husbands to reject his pleas. Even within the royal court, the women rose up against the agreement, broke the hookah and joined the boycott.

In his book, The Tobacco Boycott, Ibrahim Taymouri writes: “Women’s perseverance in this movement was such that when the ban on tobacco was announced, women led the protesters who marched toward Nasser od-Din shah’s palace. As they passed through the bazaar, these women closed down the shops, igniting a city-wide strike.”5

Historians write that when the throng of people reached the palace the Qajar monarch sent one of his confidants to calm the women. His attempts at talking to the protesters failed, because the women continued shouting slogans against Nasser od-Din shah.

When, in a nearby mosque, the Friday prayer leader called on the marchers to disperse, angry women charged in and forced him to flee.

One woman, the tales of whose audacity have been passed down through generations of Iranians, is Zeinab Pasha. Also known as Bibi shah Zeinab, she led the popular opposition to the Rejie agreement in Tabriz, capital of East Azerbaijan Province.

The seven groups under her command themselves led other groups of women. When government forces intimidated the bazaar merchants into opening their shops, Zeinab Pasha and a group of armed

women, wearing the chador, re-closed the shops.6 Eventually, bowing to pressures from across the country, Nasser od-Din shah canceled the Rejie agreement.

The beginning of the Constitutional Movement marked the unprecedented participation of women as a major social force. As the movement grew, women’s democratic institutions grew with it. Although the Movement did not achieve its goals, it was nevertheless very important in propelling the women’s movement in Iran forward.

Many pro-Constitutionalist intellectuals addressed the situation of women and their historical oppression.

Simultaneous with attacks on the reactionary, feudalistic culture and social relationships, recognition of women’s rights became a subject of hot debate in the progressive media.

In its August 1890 issue, Qanoon (The Law), a monthly published in London, wrote: “Women make up half of any nation. No plan of national significance will move forward unless women are consulted. The potential of a woman aware of her human essence, to serve in the progress of her country is equivalent to that of 100 men.”7

Elsewhere, it wrote: “There are many cases of distinguished women surpassing men solely because of their abilities to reason and their wisdom.

Their understanding of society’s meaning and privileges is far greater than men’s.”8 Such commentaries at a time when women were generally considered as the property of men sparked many egalitarian ideas.

The expansion of the press, itself an indicator of the growth of democracy and a new era in Iran, was accompanied by greater participation of women in social affairs.

From 1905 to 1915, some 30 women journalists joined the media. Gradually, independent women’s newspapers were also published and played a significant role in diversifying public opinion, spreading the revolution and opening doors for women.

The role of women in the Constitutional Revolution began with their offers of logistical and financial support for the movement, their success at inspiring patriotism and pride at gatherings, and their participation in marches and demonstrations.

Secret or semi-secret women’s councils and associations took shape in large cities and launched a series of organized activities to advance the cause.

Activities pioneered by the more educated and enlightened women, gained momentum and women from all walks of life entered the social arena.

On December 16, 1906, Edalat (Justice)newspaper wrote the following on the role of women in the Constitutional Movement: “ The Honorable Seyyed Jamal ad-din Va’ez, addressing an enthusiastic crowd, said: ‘Constitutionalism will not take shape without financial support.

Everyone must contribute what he can.’ Suddenly, loud voices were heard among the women present. The impoverished women took off their earrings and offered them to advance this sacred movement. One

of them told His Honor, ‘I have two sons who earn two qarans (pennies) a day. From now on, I will give half of what they earn to any locality that you designate.’”9

The renowned Iranian historian, Ahmad Kasravi, referred to an incident on January 10, 1906, in Tehran:

The shah’s carriage was on its way to the home of a wealthy aristocrat, when it was attacked by a multitude of women marching in the streets, forcing it to stop. One of the women read a statement addressed to the king, saying: “Beware of the day when the people take away your crown and your mantle to govern.”10