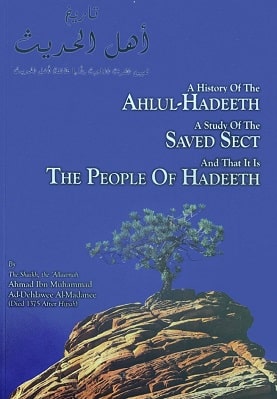 A HISTORY OF THE AHLUL HADEETHA – Book Sample

Importance of the Book (A HISTORY OF THE AHLUL HADEETHA)

The book which you have before you my brother student of knowledge, is a very important book. The author has laid out a methodology which is pleasing, simple and scholarly in establishing that the Ahlul-Hadeeth are rightfully the foremost of the people with the truth, that their methodology is the most correct of the methodologies and the best example.

Hehas come along to affirm that and to bring forth the decisive proof for it, by taking from the Qur’anic texts, the Prophetic sayings and the narrations of the Salaf. The value of this book is shown by the fact that it has come as the result of severe difficulties which the author experienced with the blind followers and fanatics. So he has produced, and all praise is due to Allaah, a comprehensive and useful book of great benefit.

Due to all that – and it being an aid to the methodology of the Ahlul­ Hadeeth and the callers of the Sunnah – I saw that it was necessary to bring out this book and to reprint it because of what it contains of decisive proofs and trustworthy evidences.

I ask Allaah to benefit the believers by it, to guide the deviants by it and to make it a tool for the students and scholars, because He is All Hearing, All Responsive.

Our final supplication is that all Praise is due to Allaah, the Lord of the Worlds.

This is a short biography of our Shaikh ‘Allaamah Ahmad ad­ Dehlawee (u’llY,.;o ). I wrote it in response to a request from some of our brothers from amongst the people of knowledge. So I say; with Allaah lies all success:

Shaikh Ahmad ibn Muhammad ad-Dehlawee and then al-Madanee. One of the famous scholars of hadeeth known for his activities and da’wah. He studied under the supervision of Shaikh ‘Abdul-Wahhaab al-Miltaanee and was active in spreading the Sunnah and the Salafee creed in India. Then he migrated to al-Madeenah an-Nabiywiyyah where he taught and gave benefit in the mosque of the Prophet.

He was helped by Haaftdh Hameedullaah ad-Dehlawee and his brother Muhammad Raafi.’ as-Salafi.yyaan. They were both from the influencial people in Delhi.

He undertook teaching the books of the distinguished Sunnah at the Daarul-Hadeeth in al-Madeenah and to serve the students of hadeeth and its people.

As for his Shaikh ‘Abdul-Wahhaab al-Miltaanee ad-Dehlawee, then he was born in the year 1280 and died in the year 1351. He was one of the famous scholars from the scholars of hadeeth in India and he studied with as-Sayyid Nadheer Hussain and Shaikh Mansoor ar­ Rahmaan, the student of Imaam ash-Shawkaanee.

He spent his entire life in studies, benefiting others and writing for sixty years in Delhi. He has many books and treatises and most of them are in the subsidiary issues and the issues of differences. He held the views of the Da’watus-Salafiyyah in his judgements and issues, like his notes to the book Mishkaat al-Masaabih and ‘Awnul­ Ma’bood.

As for ‘Allaamah, Imaam, al-Mujaddid, the scholar of hadeeth Sayyid Nadheer Hussain ad-Dehlawee, then he was born in the year 1220 and died in the year 1320. He was the main person responsible for the school of hadeeth in India.

In his time the movement of the Sunnah flourished very successfully due to his efforts and his students then spread to all corners of India. They gave importance to the spreading of the Sunnah and to revive it by studying, writing, da’wah and guidance.

As-Sayyid Nadheer Hussain ad-Dehlawee was born in the village of Surooj Qar and then he travelled to seek knowledge in many countries. He met the leaders of the jihaad movement, the two Imaams and the shaheeds – and we do not witness for anybody before

Then  he  travelled  to  Delhi  and  became  a  student  of  its  teachers there. He accompanied the scholar of hadeeth Ishaaq ad-Dehlawee for thirteen  years,  where  he  took  a  lot   of  knowledge   and  he  was succeeded  by  the  Shaikh  Muhammad  Ishaaq when  he  migrated  to Makkah in the year 12581.

He left behind a number of children, they were:

He benefited many students of knowledge in India and al-Madeenah an-Nabiwiyyah when he was a teacher in the Prophet’s Masjid, through appointment by the distinguished leader ‘Abdul-‘Azeez ibn ‘Abdur-Rahmaan Aal Sa’ud. Likewise, he benefited students in the Daarul-Hadeeth in al-Madeenah, which he founded in the year 1350, with the permission of the distinguished leader ‘Abdul-‘Azeez ibn Aal Sa’ud after his migration to al-Madeenah al-Munawarrah. The most well known from amongst his students were:

WORSHIP AND FESTIVALS IN ISLAM pdf

FLOWCHART OF HUMAN LIFE ON EARTH FROM AN ISLAMIC STANDPOINT pdf

Aqeedah
👉 Click to load all books of Aqeedah  History