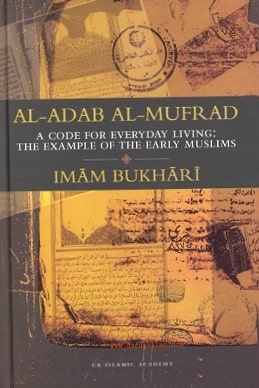 1. Honouring Parents: The Words of Allah Almighty: “We have instructed man to honour his parents.” (29:8)

‘Ata’ said, “I went to Ibn ‘Abbas and asked him, ‘Why did you ask him whether his mother was alive?’ He replied, ‘I do not know of any action better for bringing a person near to Allah than dutifulness to his mother.'”

Dutifulness to Parents, even if they are unjust

7. Ibn ‘Abbas said, “If any Muslim obeys Allah regarding his parents, Allah will open two gates of the Garden for him. If there is only one parent, then one gate will be opened. If one of them is angry, then

wrong him?” “Even if they wrong him” he replied.

Hisham ibn ‘Urwa related this ayat from his father, “Take them under your wing, out of mercy, with due humility.” (17:24)

Abu Hurayra reported that the Prophet, may Allah bless him and grant him peace, said, “A child cannot repay his father unless he finds him as a slave and the buys him and sets him free.”

Sa’id ibn Abi Burda said, “I heard my father sat that Ibn ‘Umar saw a Yamani man going around the House while carrying his mother on his back, saying, ‘I am your humble camel. If her mount is frightened, I am not frightened.’ Then he asked, ‘Ibn ‘Umar? Do you think that I have repaid her?’ He replied, ‘No, not even for a single groan.’

“Ibn ‘Umar did tawaf and came to the Maqam and prayed two rak’ats. e said, ‘Ibn Abi Musa, every two rak’ats make up for everything that has happened between them.'”