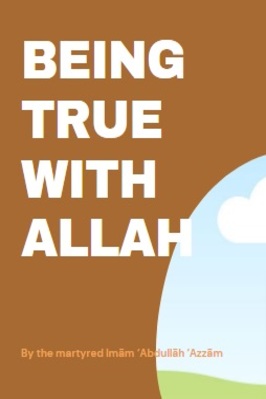 BEING TRUE WITH ALLAH

And the days went by, and through my experiences in life, what I had expected was confirmed: the foam does not live on or remain, and the puny and insignificant affairs eventually fade away, and quickly disappear with a simple gust of wind from the right to the left.

Because of this, the Salaf – may Allāh be Pleased with them – were very particular about following the truth, even if it was unpleasant and sour.17

They were very particular about being truthful, even if this was very heavy and difficult to maintain.

They were very particular about having both their apparent

and inner conditions be one and the same, even if in the most difficult of circumstances. One of them would make sure to have deeds between himself and Allāh that nobody else would know of.

So, if the people were to come to know of this act of worship that he was engaged in, he would quickly leave that area in order that he would be once again hidden from the people.

One of them, when he would enter battle, would disguise himself, and if he ended up with an abundance of war booty, he would conceal his identity and abandon his booty so that the people would not know who had acquired it.