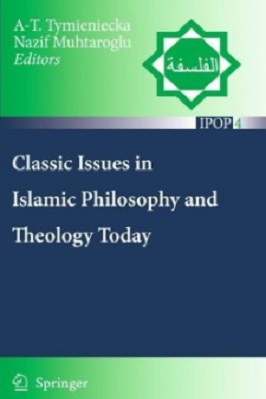 With some exceptions, there is not a real interest in Islamic philosophy and the-ology in Western institutions today. This largely ignored area has the potential to present enlightening insights into the development of the Western thought and to contribute to contemporary discussions in philosophy and theology in general. Scholars working in Islamic thought usually focus on its medieval background and consider it to be mainly of a historical interest and far away from the intellectual world of today. Showing its contemporary relevance is an important task by which the status of Islamic philosophy can be elevated to its proper station.

By considering these points in mind, the University of Kentucky organized an international graduate student conference on Islamic philosophy and theology with an emphasis on its contemporary relevance which was held between the 28th and 30th September 2007. This book emerged out of the conference by adding more chapters relevant to the main theme of the book.

This book presents analyses and discussions of different topics in Islamic philosophy and theology by relating them to contemporary debates and ideas in four main areas: epistemology, metaphysics, philosophy of religion and value theory.

There are ten chapters in sum. Some of the chapters are written by graduate students and some of them by experienced scholars. Each chapter presents considerable insight into its relevant topic but does not represent the opinion of anybody except the author.

I would like to thank the University of Kentucky, especially the Interfaith Dialogue Organization at the University, Oliver Leaman who actually came up with the idea of such an unusual conference and supported it with his all energy, Anna-Teresa Tymieniecka for her diligent efforts in preparing this book and all the participants of the conference together with the additional authors who contributed to this project with their chapters.

INTRODUCTION: TOWARD THE NEW ENLIGHTENMENT

As diverse in nations, languages, and regions of the world as is Islamic culture, its core remains uncontestably theological, metaphysical, and philosophical. These three perspectives have played their role from the early Middle Ages in debates, like those of Avicenna, Ibn Arabi and others, with Christian thinkers –responding to the deepest human concern to understand existence and truth. Following divergent routes of civilization for several centuries, Islamic thinkers have cultivated several speciﬁc convictions along these lines, expanding the core insights into the human being, the cosmos, and the All, sustaining the revelation of the Divine.

But while this core was always maintained, in subsequent periods the dialogical links with other culture’s responses to the common innermost concerns of humanity came to be attenuated or lost altogether.

Furthermore, although the issues and ideas proposed in the great systems of the Islamic historical inheritance remain vivid in historical research, in the last century, as William Chittick deplores, stagnation has occurred in creative Islamic thinking, which he attributes to the contemporary developments in world civilization.

After slow but steady development over the last few centuries, scientiﬁc and technological discovery has exploded so in its scope and in its effect on our lives that our attention has turned away from the values of personal interiority before existence toward preoccupation with well-being, practical efﬁciency, and comfort. Human standards are now so permeated by these pragmatic concerns that our appreciations, valuations, and orientations are diminished in their aims in matters concerning personal, communal, and social life. The classic concern to appreciate human existence for its role within the unity-of-everything-there-is-alive and in relation to universal principles and the truth of the All, to thereby give meaning to individual existence and its des-tiny, has ceded place to the immediate satisfaction of life. The search for truth is overridden by our seeking out means to secure this satisfaction. And yet the great issues that were dealt with in the classic periods of thought – Islamic, Christian, and other – cannot be obliterated from human life. It is of no matter that human capacities have expanded and are constantly growing with progress. The crux of human being remains the same. In the contemporary expansion and enrichment of human knowledge, the nature of our race’s very evolving hangs on our addressing the core concerns of old.

Issuing progressively from the Occidental development of pragmatic rea-son, the empirical reductionistic bent of mind has penetrated all the cultures of the globe. But spiritual longings that characterize the human mind fully considered – as comprising not only the presently favored intellective ratio-nal faculties but also the deep passional ground of the soul with its imaginative and creative powers – prompt us to take up again the essentially human concern with Truth. Life’s place in the cosmos, human ties with the All, and the perdur-ing meaning of existence rise up before us again as the everlasting concerns of humanness.

We may be strongly tempted to take a pessimistic view of the human prospect – and what if we were willy-nilly to let the universal scientiﬁc and technological consciousness monopolize thought and deﬁne practice in all the dimensions of the human life? But these great issues concerning human exis-tence within its cosmic positioning and its transcendent horizons are being revived across cultural barriers. There is a new wind sweeping through the crevices in the seeming consistency of the pragmatic attempt to deconstruct the core of essential wisdom; new insights surge and new perspectives emerge that take advantage of the evolutive acquisitions of human progress.

We seem, indeed, to be entering into a New Enlightenment in which full-ﬂedged human reason is undertaking a full critique of life’s ontopoiesis and liberating itself from the chains of pragmatic preconceptions, as the full logos of life, the everlasting Logos, opens the horn of plenty.

The present collection of essays manifests vivid interest in the issues that have animated the minds of great thinkers through the centuries. Our authors focus on the major questions that dominate the discussions of those thinkers, but not out of mere historical interest or to compare ideas and delineate their ﬁliation. Nay, it appears that their probings are motivated by the urgency of present day concerns. They see today’s questions as having been fore-traced/formulated in classic Islamic thought – and seek the contemporary relevance of the answers then given. However, in addition to this rekindling of the great Islamic formulations of humanity’s innermost insights, spurred by the urgency of the present day existential concerns, these scholars also leave the territory of their tradition to carry on, as did their forebears in the Middle Ages, a reﬂective encounter with various Christian/Occidental frameworks of thought. Participating in the today’s universal intermingling of cultures, our authors converse with Occidental authors in a dialogical spirit of sharing in wisdom and truth.

The spirit awakening in our Islamic research participates in the New Enlight-enment that is contributing to a revival of full human existence. We begin with a crucial question of theology, that of the justiﬁcation of knowledge of the divine,