COMMENTARY ON THE CREED OF AT-TAHAWI PART 2 pdf 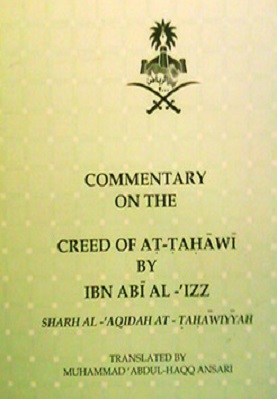 COMMENTARY ON THE CREED OF AT-TAHAWI PART 2 – Book Sample

Allah has said, “Rather, he is the Messenger of Allah and the seal of the prophets” [33:40]. And the Prophet (peace be on him) himself said, “The similitude of the prophets is that of a palace which is beautiful and perfect except that the place of one brick is vacant. Whoever goes round it is struck by its beauty. However, he wonders why the place of one brick is empty. When I was sent, that empty place was filled and the building became complete. With me the line of the messengers has been sealed” [recorded in the Şahih of Al-Bukhar and Muslim].70

He also said, “I have many names. I am Muhammad. I am Ahmad. I am Al-Mahi (the Destroyer), as through me Allah will destroy infidelity. And I am Al-Hashir (the Gatherer), as following me people will be raised from the graves and gathered together. And I am Al-‘Aqib (the Last), as there will be no prophet after me.”

in Şahih Muslim it is recorded from Thawban that the Messenger of Allah (peace be on him) said, “Among my nation will arise thirty great liars. Each of them will claim that he is a prophet. However, I am the seal of the prophets and there will be no prophet after me.”72

Muslim has also recorded that the Prophet (peace be on him) said, “Allah has exalted me above all the prophets by favoring me with six things that He did not give to any other prophet: He has enabled me to express many things in few words; He has helped me by casting fear into the hearts of our enemies; He has allowed me the spoils of war; He has permitted me to worship anywhere on the earth and has deemed it pure; He has sent me as His messenger to all mankind; and He has sealed the series of prophets with me.”73

He is Leader (imam) of the Pious.

An imam is one whose example is followed. The Prophet (peace be on him) was sent as an example to be followed. As Allah has said, “Say (Muhammad): If you truly love Allah, then follow me and Allah will love you” [3:31]. Whoever follows him and obeys him is one of the pious.

He is Chief of the Messengers.

The Prophet said, “I will be leading the children of Adam on the Day of Resurrection. I will be the first to rise from the grave. I will be the first to intercede and the first whose request will be granted.”74 This hadith was recorded by Muslim. The words that occur in the hadith concerning intercession are, “I will be the leader of all mankind on the Day of Judgment.”75 Muslim and At-Tirmidhi recorded, on the authority of Wathilah Ibn Al-Asqa, that the Prophet (peace be on him) said, “Allah chose the people of Kinanah from among the children of Isına’il, and the Quraysh from among the Kinanah, and Banü Hashim from among the Quraysh. And me he chose from Banü Hashim.”76

One might say that this statement is not consistent with the hadith recorded by Al-Bukhari and Muslim in which the Prophet said, “Do not exalt me above Moses. On the Day of Judgment, when everyone will be unconscious, I will be the first to regain consciousness. And lo and behold, Moses will be holding a side of the Throne. I will not know whether he gained consciousness before me or was exempted by Allah from falling unconscious.”77 How can one reconcile this hadlth with the hadfth that states, “I am the leader of all the children of Adam. However, this is not boasting.”78

The response to this is that the Prophet (peace be on him) made the former statement fora particular reason. A Jew once said to a Muslim, “No, and I swear by the one Who chose Moses over mankind.” The Companion got upset and slapped the Jew, saying, “You dare say that while the Prophet is among us!” The Jew went to the Prophet (peace be on him) and complained about the Muslim who had slapped him. Then the Prophet (peace be on him) made the above statement. in fact, if the Prophet (peace be on him) is exalted out of some sectarian bias of caprice, it is blameworthy. Even jihad is ruined if someone fights for the sake of partisanship. Certainly, Allah has forbidden boasting. But Allah has also said, “We have exalted some prophets over others” [17:55], and, “These messengers We endowed with gifts some above the others: to one of them Allah spoke, others He raised to degrees of honor” [9:253]. This means that what is blameworthy is to prefer one in the manner of boasting, in the sense of demeaning the others. This is how the hadith, “Do not exalt one prophet over another,” is to be undefstood,79 if that hadith is confirmed, as it is mentioned in the same hadith as the hadith concerning Moses and is contained in Al­ Buhari and elsewhere. But some say that there is a defect in this hadith, as opposed to the hadith of Moses, which is authentic, without any defect, according to the consensus.80

Some people have given a different reply. They say that the meaning of the hadith, “Do not exalt me above Moses,” Of “Do not exalt one prophet above another,” is that one should not exalt one particular prophet over another. However, there is nothing wrong in making a general statement without referring to a particular person, such as, “I am the leader of all the children of Adam. However, it is not boasting.” Since the Hadith refers to the greatness of the Prophet in general terms, there is nothing Wong in it. If you say that X is the best of all the people in the city, you are not comparing him with any particular person and, as such, there is nothing Wong in it. But it is completely different when you say X is better than Y. It is better to avoid such specific references. This is the answer given by At­ Tahawi in his Sharh Ma ‘anı al-Athar. –

COMMENTARY ON THE CREED OF AT-TAHAWI PART 2

WORSHIP AND FESTIVALS IN ISLAM pdf

FLOWCHART OF HUMAN LIFE ON EARTH FROM AN ISLAMIC STANDPOINT pdf

ISLAMIC PRINCIPLES FOR THE MUSLIMS ATTITUDE DURING TIMES OF FITAN pdf