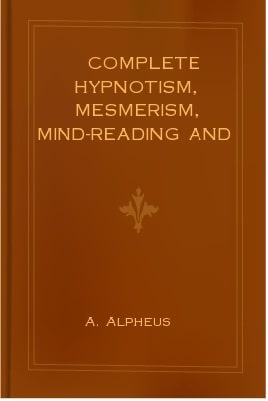 There is no doubt that hypnotism is a very old subject, though the name was not invented till 1850.

In it was wrapped up the “mysteries of Isis” in Egypt thousands of years ago, and probably it was one of the weapons, if not the chief instrument of operation, of the magi mentioned in the Bible and of the “wise men” of Babylon and Egypt.

“Laying on of hands” must have been a form of mesmerism, and Greek oracles of Delphi and other places seem to have been delivered by priests or priestesses who went into trances of self-induced hypnotism.

It is suspected that the fakirs of India who make trees grow from dry twigs in a few minutes, or transform a rod into a serpent (as Aaron did in Bible history), operate by some form of hypnotism.

Though various scientific men spoke of magnetism and understood that there was a power of a peculiar kind which one man could exercise over another, it was not until Frederick Anton Mesmer (a doctor of Vienna) appeared in 1775 that the general public gave any special attention to the subject.

In the year mentioned, Mesmer sent out a circular letter to various scientific societies or “Academies” as they are called in Europe, stating his belief that “animal magnetism” existed, and that through it one man could influence another.

No attention was given his letter, except by the Academy of Berlin, which sent him an unfavourable reply.

The Refutation of Him Who Attributes Direction to Allah pdf

THE DIFFERENCES BETWEEN THE ASHARIS AND MATURIDIS pdf

THE CURE OF ALL YOUR PROBLEMS AND WORRIES pdf

👉 Click to load all books of Comparative Studies  Psychology