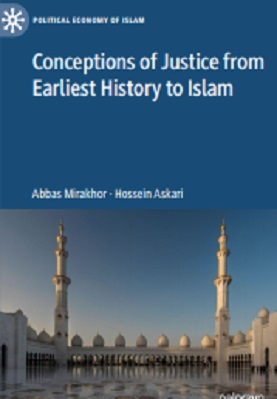 CONCEPTIONS OF JUSTICE FROM EARLIEST HISTORY TO ISLAM – Book Sample

Exceptions are Plato and the Platonic Islamic scholars and philosophers who thought of a just society as an enlightened collectivity ruled by philosopher kings. But for these thinkers, the focus was on the person of the leader not on the structure of the governance of the society that did not depend on individuals. Upon historical review, we find only two systems of thought that, explicitly or implicitly, conceived of justice as a system. The first is that of conception of justice during the period referred to the Pre-Axial Age, going back to the dawn of human civilization down to 800 BCE.

It begins with Zarathustra,1 whose system of thought includes a requirement that a just social system be anchored on just governance, and Islam that situates a just system explicitly around the axis of just governance as the anchor of the system.2

A universal dating benchmark would be helpful in reviewing the history of ideas about justice within a global, universal, multiple-sourced and inter-civilizational framework. We propose that the notion of the Axial Age provides such a vehicle.

The concept of Axial Age was coined by the German philosopher Karl Jaspers and conveys the idea of a pivotal time and identifies the period of 800–200 BCE as the Axial Age.3 Jaspers considered this age as an objec-tive empirical fact, a breakthrough in thinking that laid the foundations upon which future development of human thought, in terms of spiritual, religious and philosophical orientation, were laid. As such, the Axial Age was a universal and unique period that provided a reference point to which human history before and after this age could be compared.

Jaspers argued that this age represented a remarkable coincident of the emergence of new ways of thinking simultaneously (and apparently independently) in various parts of the globe, including China, Greece, India, Iran, Palestine and Rome. Jaspers associated these new ways of thinking with personalities such as Confucius, Lao Tse, Homer, Parmenides, Heraclitus, Plato, writers of Upanishads, Buddha, “Zoroaster” and Deutero-Isaiah.4 According to Jasper, these and similar figures laid the spiritual foundation of humani-ties’ disposition that continues to our time.

The structure of consciousness shaped during the Axial Age has had an impact on humanity ever since. As important as the concept of the Axial Age appears, it has its critics.5 For our purposes the concept is useful as it allows us to consider the conception of justice throughout history divided into Pre-Axial, Axial and Post- Axial conceptions. Beginning with Pre-Axial Age, we focus on the idea of justice as developed by Zarathustra, ancient Egypt, Mesopotamia, ancient India and ancient China.

A valid criticism of Jaspers’ concept of the Axial Age is the inclusion of “Zarathustra” among the Axial Age thinkers. It is apparently correct that Zoroastrianism developed and became a state religion in Iran during approximately the middle of the first millennium BCE.

However, Zarathustra lived a long time before this time. There are no accurate historical records that would indicate with some certainty as to the location and the time of Zarathustra because much of the historical evidence was destroyed by Alexander, Arabs and Mongols. Therefore, both of these elements are subject to speculation. He is said to have been born in Iran, lived in northeast or the northwest of Iran or that he lived in Afghanistan, ancient Bactria (Tajikistan, Uzbekistan) or Rey (close to Tehran). Moreover, there is a range of dates. Zarathustra is said to have lived some-time between 8500 and 500 BCE. And even his name is contested.

After researching carefully what has been written about the time and place of birth of Zarathustra in a number of languages and, most importantly, considering carefully the Gathas (the collection of hymns attributed to Zarathustra) themselves, Ashtiani (2002) reaches the conclusion that Zarathustra belonged to the Aryan tribes of Central Asia who had migrated from the north to the plains of Bactria and Khwarazm. And while he may have spent some time in Afghanistan, he did not spend any time in what is today Iran.

He asserts (p. 70) that one should not make one mistake that many scholars have made. It is misleading, he says, to accept the narrative that since Sassanids and Achaemenids called their religion Zoroastrian, therefore, Zarathustra was contemporary with these dynasties and that he lived among them. Many scholars rely on documents produced between the second half of the millennium BCE and ninth to tenth centuries CE, a period many centuries after Zarathustra.

Comparing the beliefs of Zoroastrianism and the Gathas, the hymns that a consensus among schol-ars suggests as being authentic songs composed by Zarathustra, Ashtiani argues that there is a vast difference between the monotheistic composi-tion of Gathas and that which came millennia after Zarathustra and was called Zoroastrianism. The latter is neither as sublime nor as deep as the Gathas.

The former, he argues, includes polytheistic superstition practices and rituals that, upon examination, are revealed as alien to Zarathustra’s beliefs (pp. 70–72).

Turning to the date of Zarathustra, Ashtiani divides his findings based on his research into three types of evidence: traditional, linguistics and dates mentioned by Greek classics (Ashtiani 2002, pp. 81–118). The first type of evidence from traditional Sassanid period to ninth and tenth centu-ries ACE sources, such as Arda-Viraf-Nameh, in which Zarathustra’s time is given as 300 years before Alexander’s invasion of Iran in 330 BCE. This date places Zarathustra around 660 BCE.

Linguistic evidence suggests that the analysis of the language of Gathas and Rig Veda (one of four sacred texts of Hinduism, known as the Vedas) reveals that they are from the same root, with the Gathas being much older according to Indian, Iranian and Western linguists. Based on evidence from these sources, Ashtiani argues that the Vedas are older than 1500 BCE and provides evidence from Indian scholarship that date Vedas to 5000–4000 BCE about a millennium before the separation of Indo-Aryans and Irano-Aryans.

The Indo-Aryans migrated to Afghanistan and today’s Pakistan along the two rivers of Indus and Sarasvati where the civilization of Indus/Harappa flourished.7 The other group migrated to Iran. Further, Ashtiani argues that in the Gathas there is no mention of cities or even village life, no mention of the use of iron,8 nor of temples and gathering of people surrounding them.

Gathas speak of a nomadic, tribal and society of animal husbandry (cattle, camels and horses attributed to the Neolithic Revolution of domestication), with no mention of organized agricultural activity, and herd life of the plains with characteristics of the Neolithic Age with primitive social order.

Other scholars, besides Ashtiani, have also considered the information which the classical Greeks provided about the time of Zarathustra. Diogenes Laertius (ca. 230 CE) claims that Xanthus of Lydia (ca. 450 BCE) stated that Zarathustra’s time was 6000 years before the Persian King Xerxes invaded Greece (ca. 480 BCE), that is, 6480 BCE.9 According to Diogenes, Hermodorus (ca. 400 BCE) confirmed the 6480 BCE date.

Plutarch (ca. 50 CE) also stated the time of Zoroaster as 5000 years before the Trojan War. Pliny the Elder (ca. 70 CE) alone mentions three classics that mentioned dates: Eudoxus of Cnidus (ca. 360 BCE) is reported to have declared that Zarathustra lived 6000 years before Plato, about 6350 BCE.  Piny asserted that Aristotle (350 BCE) agreed with this date. According to Diogenes, “Aristotle, in the first book of his Treatise on