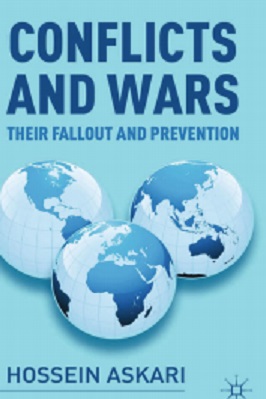 Conflicts and Wars: Their Fallout and Prevention

Our world faces a number of simultaneous and interrelated challenges that defy easy solution—global warming, poverty, hunger, aging populations, escalating medical expenses and shrinking retirement benefits, severe national budgetary and debt constraints, accompanied by costly military expenditures, conflicts, and wars. The high level of debt has become a major constraint to almost any major economic initiative in a number of advanced countries, and it could be reasonably argued that some societies are even faced with challenges that are existential.

In addition to the all-important moral reasons, the global economy can no longer support high levels of military expenditures and especially the fallout from conflicts and wars. Although the United Nations was established as the institution to achieve global peace, it has failed because of its flawed structure and manipulation by its most powerful members in pursuit of their selfish interests.

It is time for an initiative to achieve what governments and the United Nations have not. The global citizenry must be mobilized into action, action that is today made easier in the age of the Internet, social media, smart phones, and tablets.

How Conflicts and Wars Can Be Ended

Recalling what President Ronald Reagan famously said, “History teaches that war begins when governments believe the price of aggression is cheap,” our goal is to develop a framework, initially in the private sector, to increase the price of aggression to its full cost or fallout, a level that makes it expensive and painful for aggressors, be they leaders or countries, to engage in acts of aggression—sowing the seeds of conflict and war, instigating them, and being a belligerent party.

We live in a world where powerful countries use their military, economic, and political might along with organizations such as the United Nations, the International Monetary Fund, and the World Bank to pursue their perceived short-term and narrow interests.

They use force and the threat of force to interfere in the internal and regional affairs of others and to bring corrupt and autocratic rulers under their influence, invariably fueling human misery, if not conflict, around the world. They use the United Nations Security Council (UNSC) to serve their own ends and bribe weak members of the UNSC to do their bidding, as they sanctimoniously denounce corruption and espouse support for effective institutions and democratic values. They express their support for a world at peace but adopt policies that do the opposite.

In such a world, no realistic leader of a powerful country would unilaterally relinquish the perceived, or imaginary, political, economic, and military advantage his or her coun- try enjoys, while practical and opportunistic leaders of weaker countries e support of powerful countries to keep their hold on power and to reap financial gains.

Illegitimate leaders of many undemocratic developing countries, who invariably care more for their own personal interests than those of their people, have little or no incentive to change the status quo in their country as long as they have the needed foreign support or domestic military might to keep a tight rein on power. Autocratic leaders around the globe do little to develop good institutions that are at the foundation of economic and social progress but that might, in turn, undermine their own absolute rule. As a result, the citizenry are oppressed and deprived of economic progress.

These autocratic rulers invariably favor their families, the military, the small band of supporters who benefit from them, or their religious sect, ethnic allies, or tribe. The classical divide-and-conquer and us-against- them mentalities are at work.

Under such conditions, religious, ethnic, tribal, and social conflicts thrive. Leaders, regime backers, and cronies benefit from conflict and all that it entails. While the average citizen, especially in the most unfortunate countries, suffers, is economically deprived by failed policies, and pays a heavy price for the internal divisions and conflicts that emerge and for the wars initiated by the country’s leadership, wars that may have been instigated, fueled, and sustained by outside powers.

Thus, intrastate and interstate conflicts and wars are afforded fertile ground to develop and to spawn even more conflicts in the future. All the while, conflicts and wars take a heavy toll on global economic output, on the environment, on the sustainability of our planet, and ultimately on the well-being of billions of individuals with marginal livelihoods around the world. This vicious circle is almost impregnable; conflicts spawn new conflicts.

The end result is that the vast majority of conflicts are, in fact, renewed conflicts. The only imaginable way to break the circle would be if, by magic, every leader in the world simultaneously realized the utter waste of human and economic resources caused by conflict and developed the courage to renounce all aggression. Even we, naïve as we may be, realize that this will never happen without a truly significant outside force.

There may be little incentive for the autocratic leader of a developing country to be independent and nonaligned. The Non-Aligned Movement (NAM) was envisaged in part as the way around this dilemma. NAM was founded in April 1955 and its official purpose as formally stated in the Havana Declaration of 1979 is to ensure “the national independence, sovereignty, territorial integrity, and security of nonaligned countries” in their “struggle . . . against all forms of foreign aggression, occupation, domination, interference, or hegemony as well as against great power and bloc politics.”

The members of NAM represent nearly two-thirds of the membership of the United Nations and about 55 percent of the world population. While NAM was a noble idea, it has done little to enable the nonaligned to stay nonaligned or to be safe from external aggression. It has also not done anything to end the support of advanced countries for unsavory regimes that do their bidding, to deter armed conflicts and wars between countries, or to deter interethnic, intertribal, or interreligious conflicts and wars.

NAM was more effective when its moral father, the late Indian prime minister Jawaharlal Nehru, was alive. His moral sway and international stature gave NAM enhanced standing in global affairs, but today NAM is viewed as little more than a large gathering of develop- ing countries who feel left out of global decision-making or who want to pretend that they are nonaligned.

In the final analysis, it is the citizenry, not the leaders or their power- ful backers, who pay dearly for acts of aggression. In failed countries, an autocratic leader can destroy the lives of millions and deprive them of hope for a better life. In this connection, today’s Somalia, Zimbabwe, and the Sudan may be the three countries that first come to mind, but a number of other examples abound—oil-rich countries such as Nigeria, Iraq, and Libya are a few others.1 Citizens are duped in the name of religious, ethnic, and tribal solidarity and nationalism to defend their leaders when they pursue policies that divide their country and initiate conflicts.

There is no formal system of enforcing penalties on instigators of aggression even if penalties or reparations were to be assessed. There is nothing that affords the many parties to most conflicts a significant incentive, much less the obligation, to sit down and resolve their differences before taking up arms and thereby making reconciliation even more difficult. Countries can, if they choose to, seek mediation from one of the NGOs that we have already mentioned in chapter 1, but they are not given strong incentives to do so.

Yes, there are NGOs devoted to nuclear and conventional arms reduction, but there is no method to force countries to reduce their acquisition of the instruments of aggression, namely, increasingly lethal weapons. Similarly, there are many outstanding NGOs devoted to improving human rights and supporting democratic reforms, but, again, there are few or no compliance mechanisms.

The prevention of armed conflict is at best an ad hoc process with a number of contradictory policies. Governments espouse peace but their major efforts are focused on preparing for conflict and war.2 Countries have even realized that the apparent economic pain of interstate wars may be reduced for today’s voters if wars are financed by debt instead of through current taxation. Debt allows governments to postpone the financial bur- den of everything into the future, to be suffered by future generations who have little or no say in the matter.