Home » Doubts on Avicenna: A Study and Edition of Sharaf Al-din Al-masudi’s Commentary on the Isharat 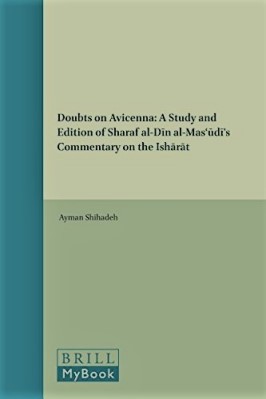 My interest in Sharaf al-Dīn al-Masʿūdī began more than a decade ago when I was able to establish a link between a figure who featured prominently in an autobiographical work of Fakhr al-Dīn al-Rāzī and a text transmitted in three manuscripts housed at the Süleymaniye Library. Al-Masʿūdī’s philosoph-ical output had previously remained almost completely unknown and unstud-ied, as it fell strictly outside the narrow bounds of what, in those days, was deemed worth a historian’s while.

And yet I was immediately struck by the great historical interest of this new source: it revealed a previously unknown dialec-tical milieu and thus effectively opened an entire new chapter in the history of medieval Arabic philosophy and Islamic theology, as I endeavoured to show in the first article I published.

Thankfully, the field has now moved on, such that our twelfth-century source no longer belongs to the onset of the ‘later’ ‘dark ages’ of Islamic thought, but occupies a central place in what I term the middle period.

The present monograph, consisting of an interpretive study and a critical edition of al-Masʿūdī’s Shukūk, is the most substantial output to date of a wider long-term project on the development of Avicennan philosophy and Ashʿarī theology during this middle period, which culminates by the end of the twelfth century in the systematic philosophical theology of al-Rāzī.

The book, as I would like to think, offers much more than ‘an edition with an extended introduction’; for over half of the interpretive part consists of focused case studies that examine not only a selection of al-Masʿūdī’s metaphysical aporias, but also their background starting with Avicenna.

There remains much room, of course, for further research: most obviously, several discussions in the Shukūk await study, and so does the later reception of al-Masʿūdī’s criticisms and ideas, especially in al-Rāzī’s thought.

The publication of this monograph has been made possible with gener-ous support recently, and gratefully, received from the Arts and Humanities Research Council for my project, ‘The Reception of Avicennan Philosophy in the Twelfth Century’.

I would like to express my sincere thanks to the numer-ous colleagues who assisted in various ways with this project, both directly and indirectly, in particular to Taneli Kukkonen who read an entire draft and pro-vided invaluable feedback, and Frank Griffel who read, and commented on, Sections 1.2–3 which cover al-Masʿūdī’s biography and oeuvre, as well as to Roshdi Rashed, Judith Pfeiffer, Himmet Taşkömür, Robert Wisnovsky, Evrim Binbaş, Laura Hassan, Abdurrahman Atçıl, Tuna Tunagöz, Samar Mikati Kaissi and Carla Chalhoub.

I am grateful to the editors of the Islamic Philosophy, Theology and Science series, Hans Daiber, Emilie Savage-Smith and Anna Akasoy, for accepting to publish this monograph and for offering very helpful com-ments on my first draft. My thanks also go to the editorial and production teams at Brill, particularly Kathy van Vliet-Leigh and Teddi Dols. Finally, I would like to thank the production team of TAT Zetwerk for typesetting the book, espe-cially Laurie Meijers.

This volume sheds vital new light on the middle period of medieval Arabic phi-losophy and Islamic theology ((By the middle period, I refer here to the transitional, late classical and early post-classical phase, stretching roughly from the late eleventh century and into the fourteenth century)).

Traditional, nineteenth- and twentieth-century accounts of this period have advocated a narrative in which Ashʿarī theolo-gians launched an offensive against philosophy, resulting in its decline in later Islamic culture, or at least in Sunnism ((For a critique of the scholarly trends that underpin this narrative, see Gutas, ‘The Study of Arabic Philosophy’)). The loci classicus of this offensive are considered to be al-Ghazālī’s (d. 505/1111) Tahāfut al-falāsifa (The Incoher-ence of the Philosophers) and Fakhr al-Dīn al-Rāzī’s (d. 606/1210) comprehen-sive commentary on Avicenna’s (d. 428/1037) al-Ishārāt wa-l-tanbīhāt (Point-ers and Reminders), which are often interpreted as implementing the same basic agenda: to undermine the philosophical tradition of Neoplatonised Aris-totelianism in defence of a theological orthodoxy.

It is now becoming increas-ingly evident that this reading is reductive and simplistic, and that to gain a sounder and more critical understanding of intellectual activity in this piv-otal period further empirical investigation is needed. To this end, an urgent desideratum is to redress the orphaned status of the illustrious ‘classics’ of our traditional canon, such as the two texts just mentioned, by ‘repopulating’ the interim gaps.

Key to this contextualisation is the exploring of ‘twilight’ sources, by which I mean sources that attest intellectual tensions, often expressed dialectically, between established thought systems and nascent trends, and hence reveal gradual shifts within their milieu and epoch, which at times lead up to a more definitive turn.

In the major shifts that were taking place during the twelfth century, par-ticularly in the interim decades separating al-Ghazālī and al-Rāzī, one of the most important transitional sources is Sharaf al-Dīn al-Masʿūdī’s al-Mabāḥith wa-l-Shukūk ʿalā kitāb al-Ishārāt wa-l-tanbīhāt (Investigations and Objections on the Pointers and Reminders, henceforth the Shukūk), as I argued when I first brought this source to light ((Shihadeh, ‘From al-Ghazālī to al-Rāzī’, 148ff)). Al-Masʿūdī’s philosophical activity had remained obscure for centuries, though in his lifetime he appears to have been a promi-nent figure in the East ((Previously, he received occasional mention as an astronomer, but many secondary sources © koninklijke brill nv, leiden, 2016 | doi: 10.1163/9789004302532_002)).

His Shukūk, the earliest extant commentary on Avi cenna’s Ishārāt, should be classed as an aporetic commentary, that is to say, a commentary which targets one or more works of an earlier authoritative fig-ure with the exclusive purpose of raising problems, or objections, on selected points therein. In the fifteen sections of this text, the author raises philosoph-ical complaints against an array of discussions on physics and metaphysics in the Ishārāt, and he frequently submits and defends alternative views of his own.

While al-Masʿūdī’s text was probably not the first commentary to be written on the Ishārāt, it is the earliest historically significant commentary. It provoked the commentator’s younger contemporary Fakhr al-Dīn al-Rāzī to compose a dedicated response, Jawābāt al-masāʾil al-bukhāriyya (Response to the [Philo-sophical] Problems from Bukhara)—thus titled because al-Masʿūdī at the time was based in the city.

The Jawābāt, as I showed elsewhere, is most probably al-Rāzī’s earliest extant philosophical work, and it was followed approximately a decade later by his well-known full commentary on the Ishārāt, which inaugu-rated the long and venerable commentarial tradition on this Avicennan text.

Later on, Naṣīr al-Dīn al-Ṭūsī (d. 672/1274) had access to al-Rāzī’s Jawābāt, and through it to al-Masʿūdī’s objections, both of which get cited in his own com-mentary on the Ishārāt.6 However, being an aporetic commentary, as opposed to an exegetical one, al-Masʿūdī’s Shukūk bears an almost accidental affinity to this later commentarial tradition, for despite having the same target text, in terms of form and objectives it genealogically belongs to the genre of aporias, which includes such texts as Abū Bakr al-Rāzī’s (d. 313/925) aporias on Galen and Ibn al-Haytham’s (d. ca. 430/1039) aporias on Ptolemy.

In two main respects, however, the interest of al-Masʿūdī’s Shukūk goes well beyond its marking the nascence of the commentarial tradition on Avicenna. Foremost is the vital insight that, when read in context, the text affords us into the development of philosophy and rational theology in the East during……