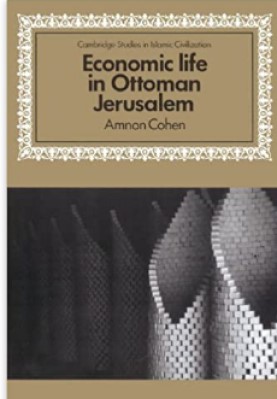 About the book – ECONOMIC LIFE IN OTTOMAN JERUSALEM

Jerusalem-was never just another Ottoman town, but in the heyday of the Ottoman Empire it displayed many of the characteristics of a Muslim traditional society. Professor Cohen makes full use of the rich and hitherto unexplored Arabic and Turkish archives relating to this period to reconstruct a vivid and detailed picture of everyday life in this lively urban centre.

His study focuses on the major guilds of sixteenth-century Jerusalem – butchers, soap-producers and dealers, millers and bakers, describing and analysing their production methods, prices and measures, and the services they provided for the local population.

In addition, their economic ties with neighbouring villages, as well as their social background and inter-relations are discussed. The author shows how this detailed knowledge can lead to a better understanding of the longer-term changes in the economy of the city and of the Empire as a whole.

Jerusalem became part of the Ottoman empire, as did most of the Arabic­ speaking provinces, during the last months of 1516. These major political developments came in the wake of a military campaign that put an end to three centuries of Mamluk nıle in Syria, Palestine and Egypt. Covering an area that had never been regarded as militarily threatening or economically attractive, neither Damascus nor Cairo were originally considered by the Ottomans as important objectives. Jerusalem, much smaller in size and of minimal administrative consequence, was even less significant- its religious history notwithstanding.

Once these cities were incorporated into the Ottoman body politic, the rulers’ initial lack of interest became irrelevant. They were the masters and acted accordingly. The first years of rule in the newly acquired territories must have been uneasy for both govemor and subjects.

The death of Sultan Selim and the succession of his son, Suleiman, in 1520, did not alleviate the situation. The govemor of Syria, a former Mamluk officer who had crossed the lines and joined the Ottoman camp at the crucial stage of their takeover, took advantage of what seemed to him, prematurely, to be the demise of the new rulers. He rebelled against the state and its newly established sultan in the hope that this time too, he was betting on the right horse.

To his surprise, the central govemment overcame him easily, but from the administration’s perspective the episode nıust have complicated matters even further; it would now take longer to impose Ottoman rule definitively. The first Ottoman land and population census (ta!Jrır) was not carried out until 1525-6, and it took tlıe Jerusalem kadi another five years to establish a func­ tioning court system. The earliest court records (sijill), stili messy in form, but increasingly important and from the outset very reliable are dated 1530/1.

The administrative structures devised in the second decade of Ottoman rule, became fully operative in the course of the 1530s. The second census held in Jerusalem in 1538–9 proved to be more comprehensive and reliable.

There was an increase of private building activity in the various neighbor­ hoods, and the government initiated preparations for a major construction project. For many years the walls surrounding the city were too dilapidated to provide any significant protection, but the Mamluk authorities did nothing to repair them.

The Ottoman administration knew that providing elementary safety to life and property would have an immediate effect on the flagging economy and dwindling demography of Jerusalem and would also enhance the new rulers’ prestige within the Muslim community. They therefore undertook the renovation of the walls. Istanbul and Damascus initiated the plans for the project, allocated part of the budget and sent technical and administrative experts. The local population of Jerusalem, as well as that of all other districts of Palestine, contributed their share of taxes to defray the cost of building materials and skilled labor.

The commemorative inscriptions over the main gates of “the walls of Suleiman” specify that the actual building took place between the years 1538–41, but one may safely surmise that a project of such magnitude took longer; the preparatory work started earlier and the final touches were added later than is stated on the forma} inscription.

The district governor whose official seat was in Jerusalem was entrusted with the keys to all the newly installed gates although they were actually deposited with his deputy, the subaşı. Keeping these keys was not just a symbolic act; the subaşı had to ascertain that the gates to Jerusalem were locked from sunset to daybreak in order to prevent unwarranted intrusion from the outside. Nevertheless, attempts were made to surmount the hurdle these walls presented.

Less than three years after the official completion of the ramparts project, while conducting a search in a cave in the Eastern village of Buqay° al-Da’n, the district governor found an authentic replica ofa key to the gate closest to the Temple Mount area. Members of the blacksmiths’ guild were summoned to court in a futile attempt to find the accomplice.

Other steps must have been taken to prevent the recurrence of such an episode as the sijill archives make no further references to events of this kind. Other techniques, however, were tried: ten years later, a woman living in one of the larger neighborhoods (Bab I:lina) was kidnapped late at night, without anyone noticing it, and was smuggled out of town by means of ropes thrown over the walls.

Apparently the walls did not seal the town off completely from the surrounding world, but even the afore-mentioned attempts indicate a new reality: the importance of security in Jerusalem, day and night, was recognized. 1