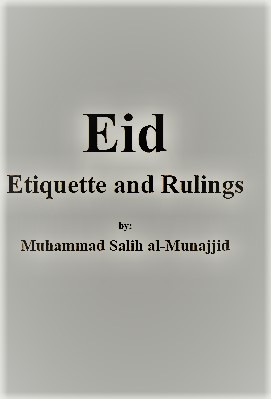 Praise be to Allaah, Lord of the Worlds, and peace and blessings be upon our Prophet Muhammad and upon all his family and companions. “Eid” is an Arabic word referring to something habitual, that returns and is repeated. Eids or festivals are symbols to be found in every nation, including those that are based on revealed scriptures and those that are idolatrous, as well as others, because celebrating festivals is something that is an instinctive part of human nature.

All people like to have special occasions to celebrate, where they can come together and express their joy and happiness. The festivals of the kaafir nations may be connected to worldly matters, such as the beginning of the year, the start of an agricultural season, the changing of the weather, the establishment of a state, the accession of a ruler, and so on. They may also be connected to religious occasions, like many of the festivals belonging exclusively to the Jews and Christians, such as the Thursday on which they claim the table was sent down to Jesus, Christmas, New Year’s, Thanksgiving, and holidays on which gifts are exchanged.

These are celebrated in all European and North American countries nowadays, and in other countries where Christian influence is prevalent, even if the country is not originally Christian. Some so-called Muslims may also join in these holidays, out of ignorance or hypocrisy. The Magians (Zoroastrians) also have their own festivals, such as Mahrajaan, Nowruz and so on.

The Baatinis have their own festivals too, such as “Eid al Ghadeer”, when they claim that the Prophet () gave the khilaafah to ‘Ali (esand to the twelve imaams after him.

The Muslims are Distinguished by their Festivals

“Every nation has its festival, and this is your festival.” … indicate that these two Eids are exclusively for the Muslims, and that it is not permissible for Muslims to imitate the kuffaar and mushrikeen in anything that is a distinctive part of their celebrations, whether it be food, dress, bonfires or acts of worship. Muslim children should not be allowed to play on those kaafir festivals, or to put up decorations, or to join in with the kuffaar on those occasions. All kaafir or innovated festivals are haraam, such as Independence Day celebrations, anniversaries of revolutions, holidays celebrating trees or accessions to the throne, birthdays, Labour Day, the Nile festival, Shimm al-Naseem (Egyptian spring holiday), teachers’ day, and al-Mawlood al-Nabawi (Prophet’s Birthday).

The Muslims have no festivals apart from Eid al-Fitr and Eid al-Adhaa, because of the hadeeth narrated from Anas (artistwho said:

“The Messenger of Allaah (s) came to Madeenah and the people had two days when they would play and have fun. He said, “What are these two days?’ They said, “We used to play and have fun on these days during the Jaahiliyyah. The Messenger of Allaah () said, ‘Allaah has given you something better than them, the day of Adhaa and the day of Fitr.”” (Sunan Abi Dawood, 1134)

These two Eids are among the signs or symbols of Allaah which we must celebrate and understand the aims and meanings behind them.

It is haraam to fast on the days of Eid because of the hadeeth of Abu Sa’eed al-Khudri (Les), who said that the Messenger of Allaah (*) forbade fasting on the day of Fitr and the day of Sacrifice (Adhaa). (Reported by Muslim, 827)