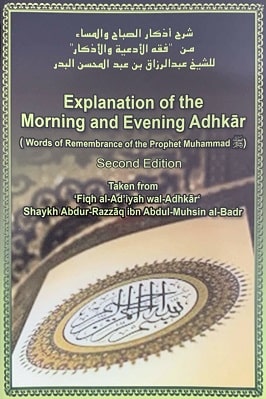 Explanation of the Morning and Evening Adhkar

“…the meaning (purpose) of Dhikrullah in the morningis to open and begin one’s deeds for the day with the remembrance of Allah.

Likewise, Dhikrullah at the time of sleepingis to seal one’s deeds (at the end of the day) with the remembrance of Allah.

In this way, the Hafadha (recording angels) will record in the beginning of his Saheefah (daily record) a righteous deed and they will seal it with the like of it.

Consequently, it is hoped that he will have Maghftrah (forgiveness) of whatever sins were committed between this.” [End of Quote]

The Time for the Morning & Evening Words of Remembrance

With the hope that a believer will increase his/her remembrance of Allah; and to aid the Muslim in grasping the importance and full significance of these supplications, each supplication is accompanied by an in-depth explanation of its words, along with the text of the Hadeeth which puts the words in proper context and further clarify its meaning and importance, and sometimes mentions the benefit or reward for saying it.

This explanation is taken from ‘Fiqh al-Ad’iyah wal-Adhkar’ (Understanding the Words of Supplication and Remembrance/ by Shaykh Abdur-Razzaq ibn Abdul-Muhsin al-Badr (may Allah protect and preserve him and his father).

Concerning the importance of understanding and reflecting upon the meaning of these words of remembrance, Shaykh Abdur-Razzaq (may Allah protect and preserve him) says:

“The scholars (Rahima-humullah) have drawn attention to the importance of the worshipper having knowledge of the meanings of these words, as well as his calling to mind that which they point to.

Likewise, in accordance with what is in the heart of the worshipper – from this knowledge and consciousness (of the meanings and indications of the words of the supplication) – he will have a superiority and excellence that will not be earned by others. And the effect of this supplication upon him will be more intense, deeper and more lasting than its effect upon others.

Whoever recites this Dhikr – or any other one of the words of remembrance which have been transmitted [from the Prophet (.S.allAllahu ‘Alaihi wa Sallam)] – without calling to mind the meaning, and without understanding its indications – then, the effect of the Dhikr upon him will be weak.